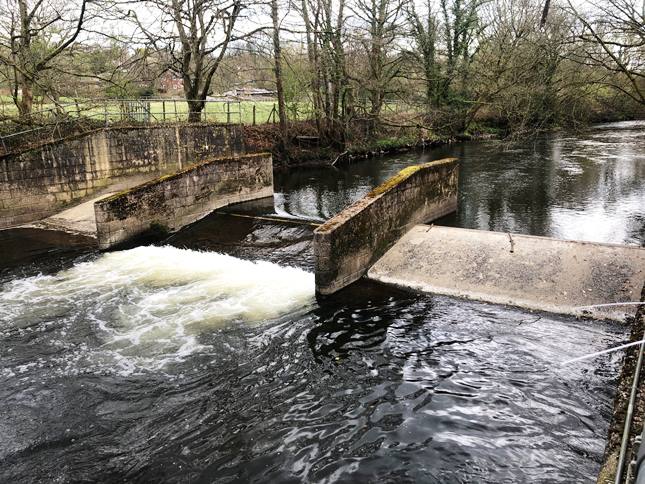 The Crump weir at Brabyns Park

The river Goyt, which separates the counties of Derby and Chester, swelled to that degree at the confluence of three brooks, that it covered the highest battlements of Marple bridge, upwards of 22 feet from the surface of the water when at a common height. It washed away every thing on the Derbyshire side of the bridge, except the bare arch stones, which tho’ founded on a rock at each end, ’twas surprizing they were left, as much bigger were torn away.

The highway leading to the bridges guarded by a good wall upwards of three hundred feet in length, and founded on a rock nineteen feet higher than the river. The rock and wall for some roods were carried away and the roads rended impassable for any carriage. There was one stone torn away from the rock and carried several rood down the river that contained 169 cubital feet.

At Mellor Moor End the storm was dreadful. The waters seen to gather in one immense stream and then rush down the brow till it got onto a small flat opposite several houses and small shops, filling them with sand and debris, causing the greatest anxiety on the part of the poor inhabitants.
….. near the United Methodist Chapel where there is a steep brow, the water rushed with tremendous speed and ploughed the road in deep fissures and laid the gutters bare. 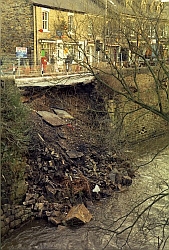 Much of the reason is because the reservoirs, built over time on the Goyt and some of its tributaries, regulate the outflow to a great degree. Nevertheless, there were still occasional calamities such as the storm in December 1991 which caused the retaining wall supporting Town Street in Marple Bridge to collapse into the river. [left]

We have a lot of rainfall in the UK but it is only relatively recently that our hydrology is being assessed on a scientific basis. There are three main elements to planning the use of water resources and they all depend on continuing measurement. Rainfall records began in 1729 and evaporation measurements about 50 years later. At first these were carried out by interested amateurs, particularly clergy, but in the nineteenth century it spread and became more organised, eventually coming under the umbrella of the British Rainfall Organisation.

The second element was a knowledge of groundwater and particularly the water table. The Geological Society (1807) and the Geological Survey, founded in 1835, were instrumental in recognising and drawing attention to this key element. However, the third element - continuous runoff measurement - was much slower to develop, despite its obvious importance in forecasting and flood control. The first routine measurements of river flow in England began on the Thames and Lea in the 1880s but it took almost a century until there was a uniform national network. This was established in its current form by the early 1970s and consists of a national network of flow measurement stations supplemented by a variable number otemporary monitoring sites. 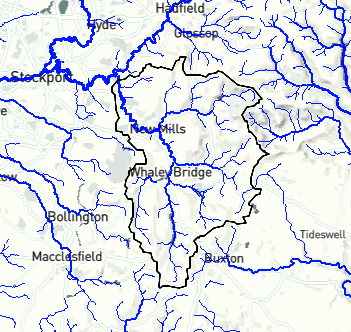 The weir in Brabyns Park is one of the earliest products of this more formal programme of monitoring and control. It was built in 1969 as one of the first of about 1500 similar weirs and it is the key measuring point for the whole of the Goyt catchment area, 183 sq. kms. [right] This is a mainly rural area of millstone grit and boulder clay but it includes several reservoirs within the catchment - Kinder, Combs, Todd Brook, Errwood and Fernilee. The next measuring station is at Brinksway which is on the Mersey below the confluences with both the Etherow and the Tame.

The weir itself is a Crump weir, so-called because the design originated with E.S. Crump in 1952. (Edwin Samuel Crump was an English civil engineer specialising in hydraulics.) They are one of the most used designs in the UK network. The weir is a control structure, triangular in shape and broad-crested. Broad crested weirs are robust structures that are generally constructed from reinforced concrete and which usually span the full width of the channel. The triangular shape has several advantages. The upstream slope, typically 1:2, allows most sediment to flow over the weir so only minor siltation occurs upstream of the weir. The downstream slope is much shallower, typically 1:5, and this should allow most aquatic creatures to pass up the river.

The weir is divided into three sections. Overall it is 19 metres wide with a 7 m centre crest flanked by two 5.5m crests. Critically the two outside crests are 40 cms higher than the centre crest so in normal times all the flow of the river is directed through the central channel. When the river is in flood the level rises to an extent that the side channels come into play as relief overflows. 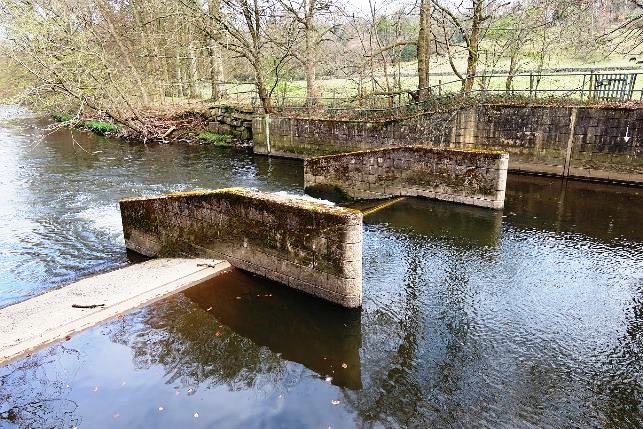 The measurement of both river volume and flow is needed to calculate total runoff. All the equipment is in the hut alongside the weir. The river level is measured using a stilling well that is accessible from inside the hut and the flow is measured by a paddle wheel device. Measurements are generally taken every fifteen minutes and sent off automatically. The whole process is powered by solar panels on the roof of the instrument hut.

At times of flood, measurement can get tricky but there are more sophisticated instruments which can be brought into play. For example, an acoustic doppler current profiler measures current flow at various depths using the Doppler effect of sound waves. If the worst comes to the worst they can take manual measurements from Marple Bridge to the water level though they did not give much credence to my suggestion that Pooh Sticks could be used to measure velocity.
https://en.wikipedia.org/wiki/Poohsticks 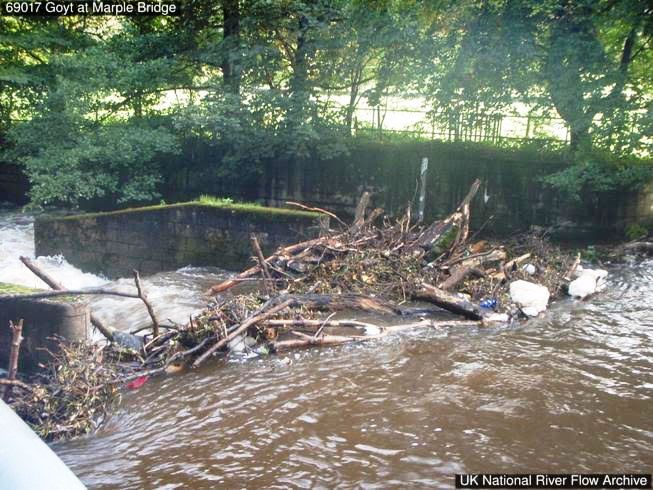 This shows what can happen from time to time proving that with the best will in the world, these stations are not fully automatic and need occasional human input.

At first sight a weir built as recently as 1969 may not be considered part of our local heritage but it is emblematic of how water power both created the initial wealth in this area but could also destroy as readily as it could create. Much more detail about the nature and statistical records of our weir in Brabyns Park can be found at:
https://nrfa.ceh.ac.uk/data/station/info/69017

But you may think that this is for enthusiasts only. Certainly, the significance of much of the information on the site was well above the understanding of your wretched correspondent who last studied science at the age of fifteen. A more accessible source of information about river levels on the Goyt can be found at:
https://riverlevels.uk/goyt-compstall-marple-bridge#.YMfNjS1Q3Jw.

But this does not have the rich variety and historic information of the National River Flow Archive. You pays your money and you takes your choice.