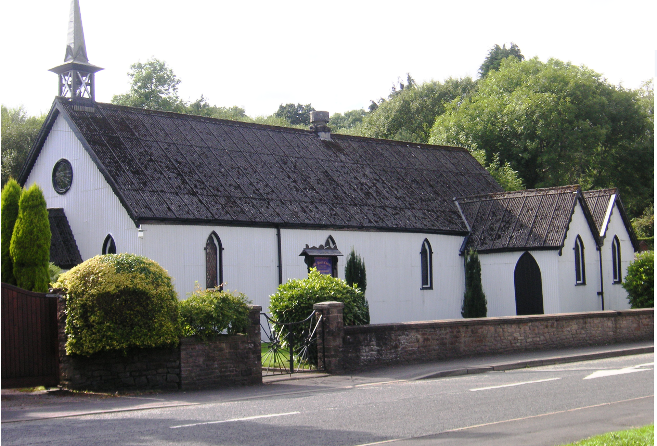 For over a century, Strines was home to the Strines Calico Printing company, which became one of the leading companies printing not merely calico, but any and every sort of fabric. In the 19th century the Company owned much of the land and employed many of the inhabitants of Strines and the neighbouring villages. Now, in 2021, the works has been closed, demolished and replaced by a housing estate. The village has turned into a dormitory suburb, but it still has its church which (until the present hiatus) continued to serve the neighbourhood and the adjoining areas of Marple and New Mills. Services will resume as soon as present restrictions on meetings are removed.

The initiative for a church in Strines came from the owners of Strines Calico Print Works, Thomas Henry Nevill and later by his son, Charles Henry Nevill. In a speech at the Christmas party in 1853 one of the partners of the works proposed a toast to the Bishops and Clergy. He said “it had long been in contemplation to establish a place of worship in Strines”. At first services were held on the works premises. One of the owners of the works, Thomas Henry Nevill, bought a patch of land on the Marple to New Mills road from the Egerton estate (who owned most of the area), and erected four houses for their senior employees together with a corrugated iron church. At the time, corrugated iron churches were available from several manufacturers and many were sent overseas as mission churches. They were universally referred to as “iron churches”. St Paul’s may have been intended as a temporary building, but with regular maintenance and repainting it has survived for over 140 years. Mr Nevill appointed and paid the Curate. The opening was in August 1880 and the North Cheshire Herald gave a detailed description of the interior of the new church and the opening services, both morning and afternoon, which were conducted by the Canon of Chester and the newly appointed curate-in-charge, the Rev. A. Armitage from Harperhey. The first baptism followed in November. The baby was Godfrey Pariss Deakin. Many years later it was found that he was the nephew of Edith Nesbitt, the author of “The Railway Children”. 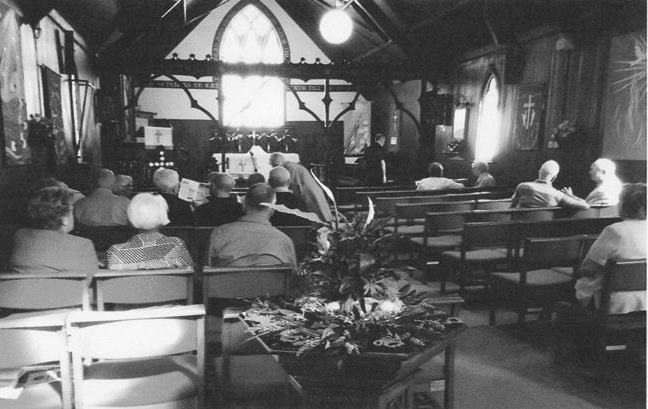 The building is parallel to the road, which puts the altar at the north-west, not the conventional east. The church is made of corrugated iron and has to be repainted regularly to prevent rusting. This gives it the nickname “Tin Tabernacle”. It has a small bell-cot over the door. There is no graveyard but lawns and gardens surround the building. The interior walls are lined with wood, which both looks and feels warmer than the outer iron wall. There are two small extensions at the altar end. The extension on the road side is the vestry, which was originally only half its present size.

The extension opposite the vestry is for the organ. Originally, the musical accompaniment was an “American organ”, which is similar to a harmonium. The pipe organ was installed in 1893. To accommodate the longest pipes, the floor of the 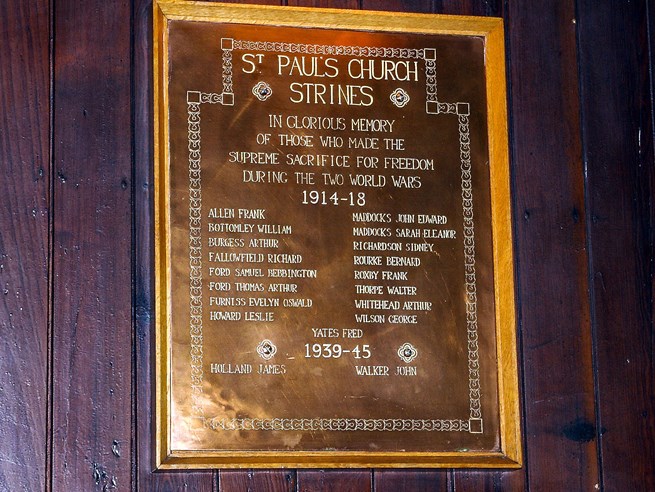 organ chamber is below the church floor and the roof is raised. With regular tuning and overhauls this is still serving us.

Seating was originally in pews, but these have now been replaced by chairs except for the choir. Early records imply that when services were held at the works, there was a choir. Certainly, choir stalls were included when the church was built. The choir has varied widely in numbers but has survived. The only indoor memorial commemorates the fallen of both World Wars. The silverware used for communion services was donated by Strines Print Works. It is kept in the church safe in a box with fitted compartments which was not mass produced but probably made by the works joiner.

The Service Book record for Christmas Day 1880 has the bald statement “The Iron Church burnt. Services in Sunday School.” Just how much damage was done is not recorded, but it must have been quite extensive, as services in church did not resume until April. The Derbyshire and Chesterfield Herald speculated in its report about the fire, that a lamp had been left burning and the flame must have caught some light substance such as decorations. It went on to report that before the firemen from the neighbouring works could get to it, the organ, roof, east window and other portions of the interior fittings were totally wrecked. The damage probably amounted to £250 but fortunately the premises were fully insured.

Sunday school classes started a couple of months after the church opened “with a large attendance”. In those days, children were sent to Sunday School as part of their basic education. This has continued ever since with varying attendance until recently, but has now closed for lack of children attending.

Another corrugated iron building was brought up from the works in 1893 and erected on the corner of Strines Road and Station Road almost opposite the church. In 1913, after the Strines Print Works had been absorbed into the Calico Printers Association (CPA), the Chester Diocesan Finance Association bought it with a contribution from St Paul’s. This became known as “The Sunday School” although it was used for all church purposes except actual worship, and it was home to a badminton 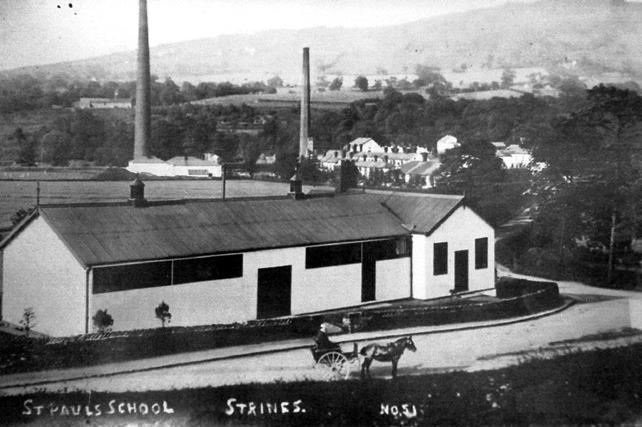 club. The photograph [above] shows it as it was in the 1920s. In 1913 there were six Sunday School classes for boys and six for girls. By the 1950s, the Sunday School was showing its age, and it was demolished. A pre-fabricated building was chosen as its successor, erected alongside the church and joined on to it. The Bishop of Stockport officially opened the “New Room” in October 1973. Although it is smaller than the one it replaced, it has a better kitchen and has proved invaluable as a venue for the church congregation to socialise after services, but the badminton club is no more.

Up to the outbreak of the First World War, St Paul’s organised an annual “May Queen Festival”. A procession assembled and processed down Strines Road, led by a brass band, past the church to the cricket ground near the Print Works. There, the May Queen was crowned by the previous year’s Queen followed by “Court Revels, Sports and Dancing”. Judging from photographs at the time, most of Strines turned out for the occasion. The last time there was such a crowd in Strines was when the Print Works chimney was felled. Strines has turned into a dormitory suburb of Marple, and now has very little community spirit, although it does have a ‘community website’. 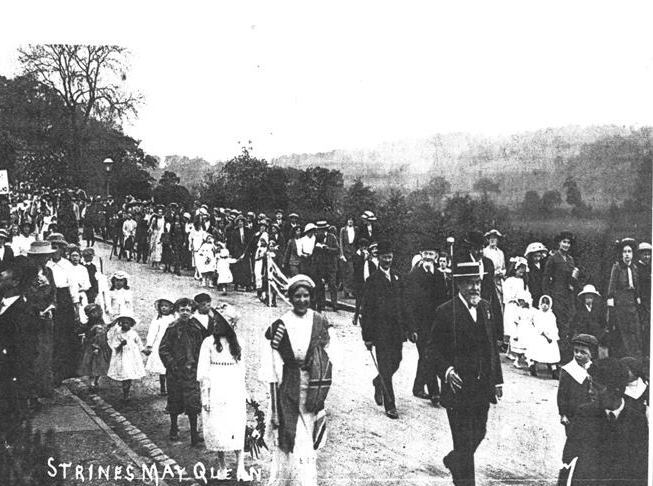 Although St Paul’s was built for Strines, people these days are so much more mobile that it draws its congregation from Marple and New Mills as well. When St Paul’s was opened, it was in the parish of High Lane, but in 1934, there was a general reorganisation of parish boundaries. St Paul’s became part of the parish of All Saints, Marple and is served by the same clergy and lay readers. Its associated meeting room is used for village events and elections. These days people tend to go to the church whose style of service suits them, not necessarily the nearest. All Saints and Strines are in the “evangelical” section of the Church of England.

Strines was fortunate in having a resident couple, Frank S T Barton and his wife Ida, who kept services going for many years when no clergyman was available. Frank was a Lay Reader and Sunday School Superintendent. Ida was a pianist and organist. Now, St Paul’s is one of the several churches in All Saints’ parish served by a team comprising the Vicar, the Curate, and the Lay Readers. 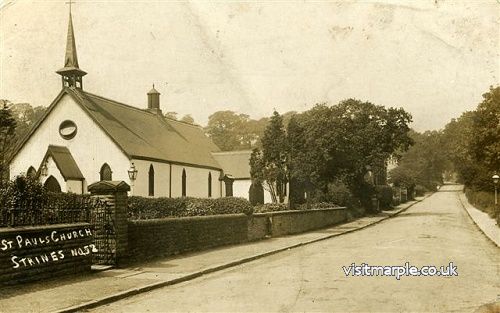 St Paul’s has had several conscientious and long-serving Church Wardens:- Israel Shaw, Philip Rose, Geoffrey Taylor and Daphne Dawson. They each kept a very close watch on the building and made certain that the maintenance work necessary for a “temporary” structure was carried out. Without their efforts, the “Tin Tabernacle” would have rusted away due to the water which comes down the hillside whenever it rains. Fortunately, the drainage has now been improved. The whole building has to be externally painted periodically, and the bell-cot has been repaired several times.

In 1980 St Paul’s celebrated it centenary. The Bishop of Chester, the Rev. T. Whitsey, came to preach in September. A former vicar, Rev. A. T. Carver, and as many of the former curates as possible were invited to come and preach, and six came. There was also a Flower Festival and a Historical Exhibition.

Until a few years ago, to be legal, marriage services had to be conducted in a Parish Church or a Registry Office, so members of St Paul’s congregation had to go to All Saints to be married. The law was changed so that weddings could take place anywhere licensed for weddings, provided the officiating minister or registrar was suitably authorised. The first one at St Paul’s was in May 1998 between Jeanne Barker and Don Johnson.

The Marple Council of Churches was formed in response to a growing feeling that the various churches were partners, not rivals, in a largely indifferent world. St Paul’s has been a member since its inception. When the Council celebrated its Silver Jubilee in 1988, St Paul’s took an active part in the Joint Services and the Exhibition. Each Good Friday the Council organises a walk to the cross on Cobden Edge. From the cross one can see all of Marple and most of Manchester as well.

As the year 2000 approached, thoughts turned to a suitable way of marking the event. It was decided to install stained glass in the window over the main door. This design now serves as a logo for St Paul’s. The entrance to the church used to be through a small wooden gate. Another part of the Millennium commemoration was to replace this with a pair of metal gates and to widen, and resurface all the paths. 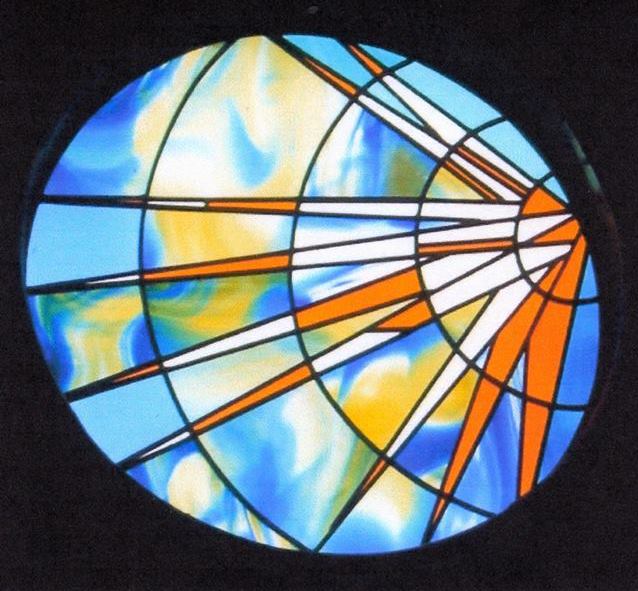 Over the years, St Paul’s has supported various missionary societies, but the one they have supported most consistently is the Leprosy Mission. A representative of the mission usually visits Strines and preaches annually.

By the year 2000, congregational numbers were declining nationally and St Paul’s was not exempt from the trend. The church kept going with the support of people from New Mills and Marple who liked the style of service it offered. The recent national ban on meetings of all descriptions because of the spread of the COVID 19 virus has meant there have been no church services. The tin tabernacle has come through many difficult times in its 140 year history; we await the future with interest and confidence.

What is a Tin Tabernacle?

A Victorian church made from corrugated iron. A reconstructed battleship interior. The Tin Tabernacle, also known as Cambridge Hall, is one of Kilburn’s best hidden historic gems. A Culture Recovery Fund grant of £14,862 has been awarded to Notting Hill Genesis to support the essential work to the brittle and broken roof.