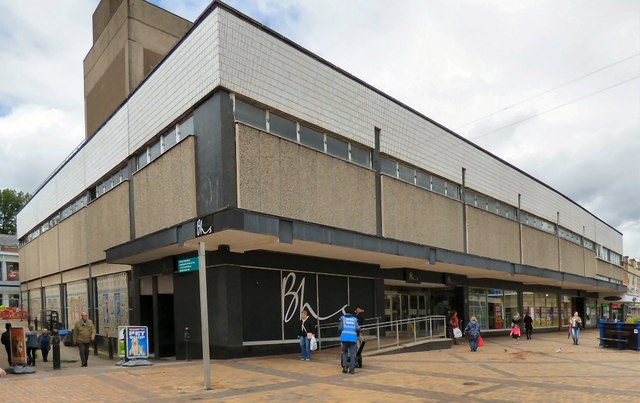 As we found out during the MLHS autumn walk round the streets of Stockport on Thursday 21st October 2021, the town centre provides plenty of evidence of its long history, dating from at least Norman times. Early Stockport developed around the market place with its steep ‘brews’ leading down to the narrow streets near the river. It is little wonder that as the Industrial Revolution gained pace in the early part of the 19th Century, bringing increased need for transport of goods and people, that traffic congestion was a 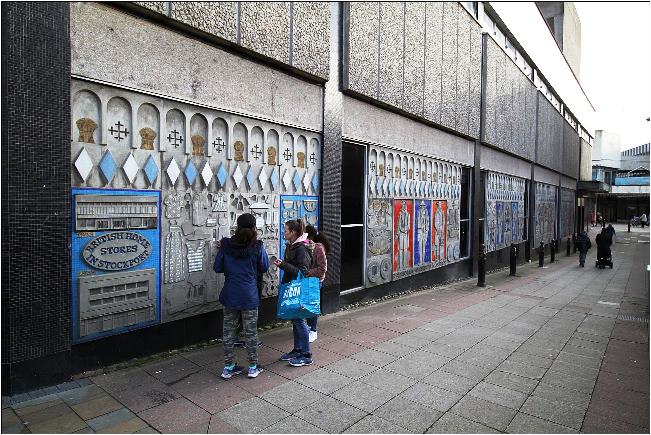 problem even then. Far sighted action was taken in the 1820s to move the main north-south road from its route along Chestergate, the Underbanks and Hillgate to a bypass route through the then countryside on the western edge of town (now known as the A6). This improved things, but there were still problems and in the 1930s, the town council proposed an ambitious plan to bridge over a quarter mile long portion of the River Mersey from Lancashire Bridge to Mersey Square as a motor road to take traffic away from that side of the town centre. At this time the major retail hub was Prince’s Street (named for the Prince of Wales after he came to open the new Town Hall in 1908.) Woolworths, Marks and Spencer and British Home Stores all had premises fronting onto Princes Street. In 1968 another major change pedestrianised the road and turned it into a shopping precinct. The department stores were extended to have their main entrances on the precinct, while Stockport Coop provided itself with a new frontage on the opposite side, creating the beginnings of the very successful Merseyway shopping centre.

The side of the British Home Stores building presented a bare and uninteresting blank wall to an alley called Deanery Way. In 1978 BHS commissioned artists Joyce Ballot and Henry Collins of Colchester Art Society to design a series of five concrete mural panels to brighten this up by telling the story of the town, starting at Merseyway, and finishing at Princes Street. 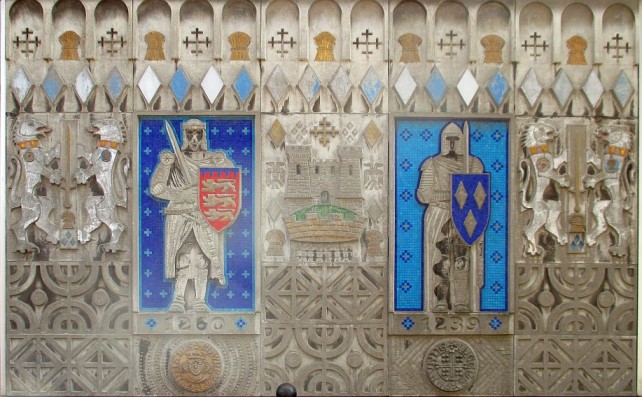 Panel 1 shows Sir Robert de Stokeport, Baron of Stockport, who in 1220 obtained a charter from the 7th Earl of Chester granting freedom of the town to its burghers (townspeople). This Robert died in 1239. The second figure is the next Baron, also Robert, who in 1260 was granted a charter for operation of a market in the town. All the panels are peppered with significant symbols. The first Robert clutches a blue shield showing three silver lozenges taken from the arms of the de Stokeports, while the second Robert carries a shield with three lions couchant as a reference to the fact that by the time of the market charter, the king had taken over as Earl of Chester. There is a coin of the period below each figure’s feet. The lions rampant on each side of the panel bear collars showing a wheat sheaf for the Cheshire side of the town and a red rose for the Lancashire side, with another wheat sheaf and more lozenges between their feet. Between the figures are motifs from the town coat of arms, showing the castle on its round hill, more Cheshire wheat sheaves and lozenges and cross crosslets from the arms of the de Stokeports, flanked by two headed eagles from the arms of the de Eton family who were later barons. Lozenges, cross crosslets and wheat sheaves, positioned in the arches of the viaduct, make an attractive border along the top of all the panels. 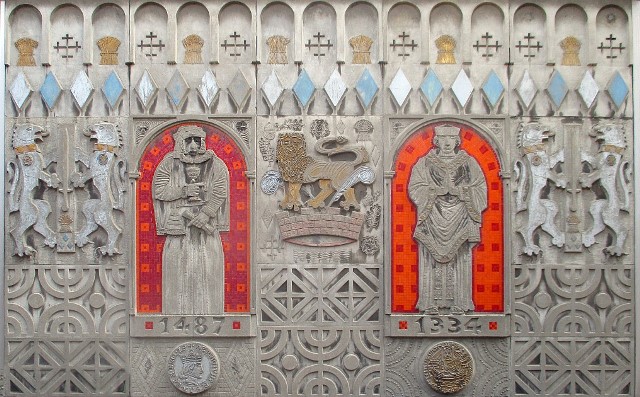 Panel 2 shows Richard de Vernon who was rector of Stockport for 28 years until his death in 1334, and is thought to have been responsible for building the early part of St Mary’s Church in the market place, the present chancel. The second figure is Edmund Shaa (Shaw). He was born in Longdendale, at the time in the parish of Stockport, the son of a yeoman farmer. He became a prominent London goldsmith, went on to be master of the Royal Mint and then Lord Mayor of London in 1482. He died in 1487 and left money in his will for the founding of Stockport Grammar School. 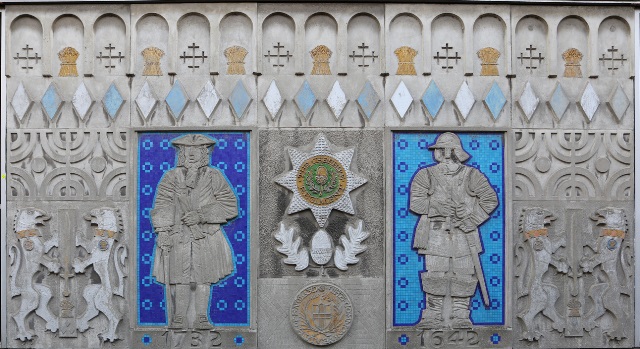 Panel 3 shows a roundhead soldier to represent the English Civil War which raged from 1642-45, and 1648-49. Stockport had some involvement in the fighting as it was in the area controlled by Colonel Dukinfield for the Parliamentary side. The panel also shows the badge of the Cheshire Regiment and an acorn flanked by oak leaves to remind us of Charles II hiding in an oak tree to escape his captors, prior to his execution. A Commonwealth coin represents the period 1649-50 when England did not have a king so functioned as a republic. The figure dated 1732 symbolises the coming of industry to Stockport, for it was then that a substantial water powered silk throwing mill, five storeys high and two hundred feet long ,was set up on the banks of the Mersey. 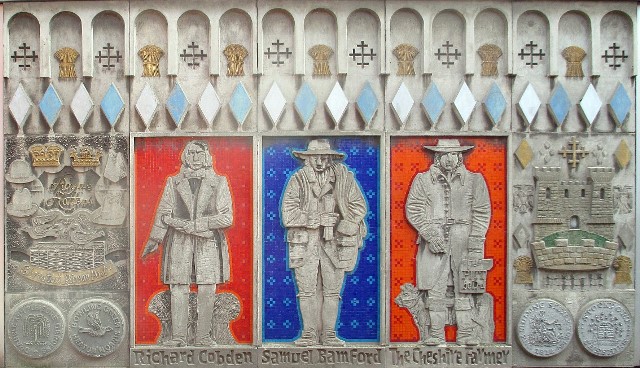 Panel 4 gives us three named figures to ponder. The ‘Cheshire Farmer’ was Jonathan Thatcher of Woodbank who on 27th November 1784 rode into Stockport on his cow in protest against a tax on saddled horses imposed by the government of William Pitt to raise money to pay for the American War of Independence (1775-83). The incident is explained in a little rhyme:

‘Tax on a horse shall be void
For on my Cush (cow) I mean to ride
Let each man like me strive to outwit
And drown all taxes in a pit’.

The middle figure is Samuel Bamford, a prominent activist who spoke at St Peters Fields, Manchester in 1819, when a big gathering of people attended a rally to protest about poor political representation for northern industrial towns. Misinterpreting the demeanour of the crowd, the cavalry charged, resulting in 11 deaths and 500 injuries, an event known ever afterwards as the ‘Peterloo Massacre’.
The left hand figure is Richard Cobden. He was Stockport’s MP for six years from 1841-47. With social reformer John Bright and other radicals of the Anti-Corn Law league, they fought a long battle for abolition of the Corn Laws so that cheap grain could be imported into the country. A statue to him stands in the public gardens near St Peters Church on Petersgate.
Shown around these figures are medallions depicting admission tokens to the Ash Pub in Heaton Norris where there was dog and rabbit racing, and other noisy games, and a pleasure garden to make it respectable for wives and children! At the left is reference to Christies, a London company more renowned in Stockport for their felt hat making business on Higher Hillgate which they took over from Thomas Worsley in 1827. It is reputed that before moving to Stockport, they sent orders for hats from London to Stockport by carrier pigeon! 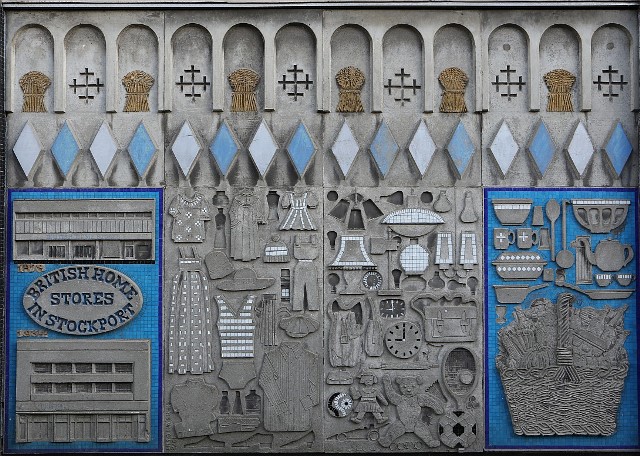 Panel 5 shows the contribution to Stockport life of the shop which initiated the panels. As well as giving an idea of what they sold, there are also depictions of the Prince’s Street frontage of 1934, and the Merseyway façade of 1976. Most of us will regret the passing of British Home Stores, later abbreviated to BHS, as the result of gross mismanagement in 2016, for which the culprits still have not been brought to book. It was a convenient source of some very nice clothing and household items at reasonable prices, and with its closure, along with that of Marks and Spencer and, most recently, Debenhams, our shopping opportunities in Stockport are much reduced. However, things might be looking up: at the moment the frontage of M&S is swathed in scaffolding as development takes place and there is a scheme under consideration to convert BHS into a number of smaller retail units.

As our walk in October and the information in this article have shown us, there is still much historical interest to bring us into Stockport even if we don’t want to come for the shopping!