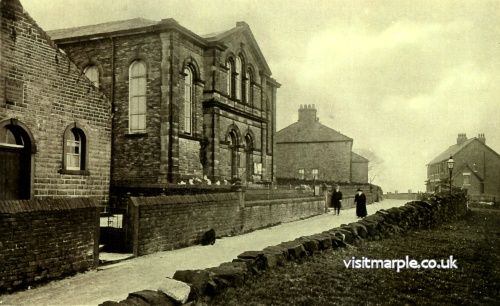 After the restoration of the monarchy in 1660, attempts to impose uniformity of religious practices met with opposition and led to break away groups of ‘non-conformists’. Their ideas of independence and self-help appealed to workers and industrialists alike and grew in popularity as the Industrial Revolution gained pace. Methodism seems to have had the greatest presence in the Marple/Mellor area, possibly because John Wesley had visited and preached in Mellor several times in the early days of the movement in the mid 1700s. It was by no means just one religious idea, but had many factions; today it is a little difficult to fathom out the differences which were so important at the time. Whatever, over the years at least 9 Methodist churches developed in the area, and in date order of establishment they were:

With a population of only a few thousand in Marple and Mellor until well into the 20th century, and in competition for congregations with C of E, Catholics and Congregationalists, one can’t help but wonder how all these churches kept going, but church attendance was required and they were, of course, the social centres of the local community, so they seem to have flourished.

The focus for this article is the Ridge Methodist Church, perched on the hill looking down to Hawk Green. Its start emphasises the many perceptions of early Methodism, because it is recorded that ‘there was much dissatisfaction with the proceedings of the Wesleyan conferences’. In 1835 five men, Thomas Barnes, Thomas Warburton, Joseph Barnes, John Taylor and Henry Jones from Windlehurst Wesleyan Methodist Church decided to meet for worship and to set up a Sunday school in a room lent by Henry Jones free of charge in the house on Windlehurst Road now known as Victoria Cottage. Quite soon the room became too small for the growing numbers, and they moved into a barn on the road side. 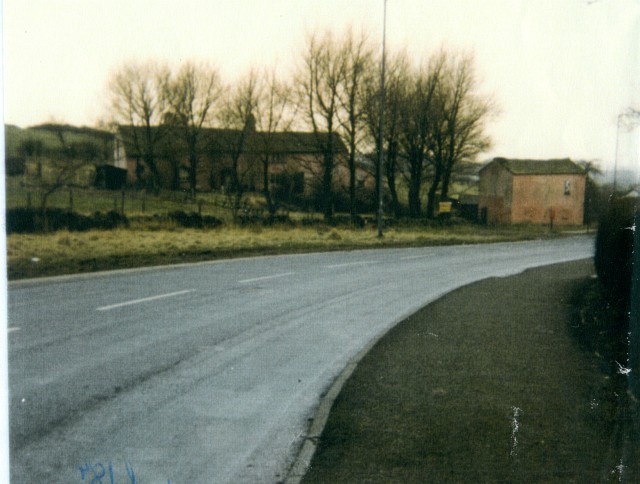 This barn stood until the mid-1990s when it was knocked down as the result of a car accident. This building soon became too small as well, and in 1844 work started to build a properly designed place of worship on land on the Ridge given by Mr Taylor. Construction was a real self-help job. The stone for the building was barrowed from the quarry further along the Ridge, and the building work was done by members of the church. The cost of the whole project was about £100.

A plaque over the front entrance records that this is ‘Mount Pleasant’. At first it was used as both church and Sunday school. The Sunday school rules were drawn up in 1847, and there is a copy in the church archives. It is clear that as well as teaching the gospel, they taught their scholars to read and write. Thomas Benjamin Barnes, Daniel Pott and Albert Bowden are remembered for their long and faithful service to the Sunday school and church in the early days.

Numbers continued to grow, and plans were initiated by the minister, Reverend Samuel Sellars, for a much larger church on land next to the first building, obtained from Mr Taylor. Once again church members did a lot of the work, barrowing stone from the quarry, and digging the foundations. The foundation stones were laid in 1876 by Mrs Swindells, Miss Taylor, D. Holland, J. Rushworth, J. Master and F.W. Johnson. 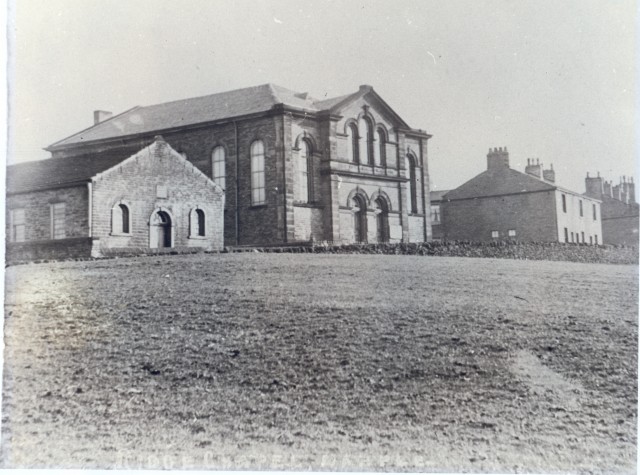 When finished the church had seating for 440 and became known as the ‘Cathedral of the North’. At first music was provided by a string band and an American organ, but a conventional organ was installed in 1898, and it was used for musical and dramatic performances, while the original building reverted back to the Sunday School. Costs were a lot more this time round at nearly £3000, but it was a much larger church! It took some time to clear the debt but this was marked by a service of thanksgiving and a singing of the doxology. see interior of 1876 church

By 1967 the big church was suffering from dry rot, and a shrinking congregation, and had to be demolished. The church moved back to share the original Sunday School building at a cost of £2000 for the alterations.
As well as fulfilling its religious purpose, the Ridge Methodist Church was a hub for the social life of its members. In the archives are minute books of the choir committee, Sunday School teachers, Women’s Bright Hour and Special Efforts Committee, and records of Sunday School parties, outings to local places of interest, processions of witness along the Ridge, pantomimes, as well as musical performances such as the Messiah, Christmas Markets, and the Christingle1 Service at Christmas. 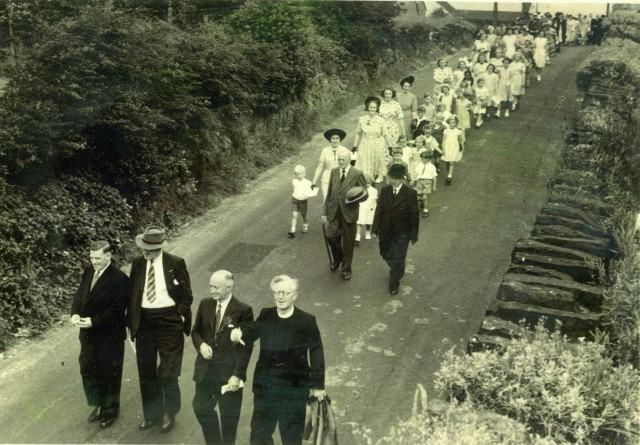 The facilities in the original Mount Pleasant building left something to be desired. At one time the w.c.s were only accessible from outside! And there was always the need for more space. This was addressed short term with installation of a portakabin, used mainly for some of the Sunday school classes. Eventually, plans were considered for an extension to the back of the building. After several ideas, including a two storey version at one point, the boiler house and rooms at the back of the building were demolished, and in 2006 a large single-storey extension was built. It included a vestry, large meeting room with adjacent kitchen , decent toilet facilities, improved heating and new entrance hall, all disabled friendly, and the church body was turned round so the pulpit and communion table are now at the western end of the building. 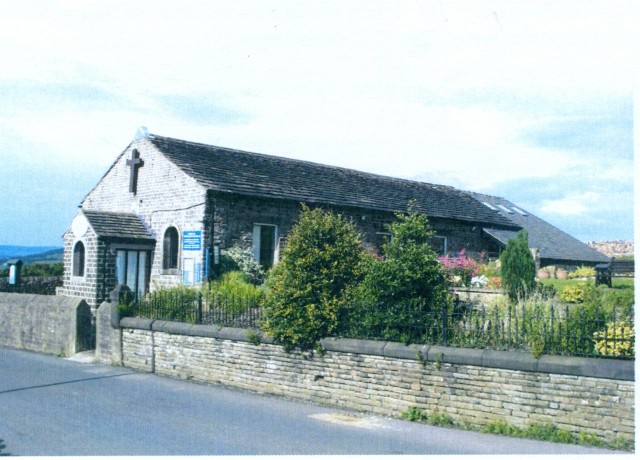 So the Ridge Methodist Church carries on into the 21st Century. The area where the Cathedral of the North stood is now the church car park, with a memorial garden at the front with seats so you can pause awhile, refreshed by the lovely view towards the Cheshire Plain.

1. Christingle celebrations have been taking place for over 50 years. Our first Christingle service took place at Lincoln Cathedral in 1968, but Christingles themselves go back much further to the Moravian church in Germany.

At a children’s service in Marienborn in 1747, Bishop Johannes de Watteville looked for a simple way to explain the happiness that had come to people through Jesus, and created a symbol — the Christingle — to do this.

2. The annual Good Friday Walk of Witness sees Christians of different denominations and of no affiliation imitate the journey that Jesus Christ took carrying his cross through the streets of Jerusalem.