Half Green or Hawk Green

Half Green or Hawk Green 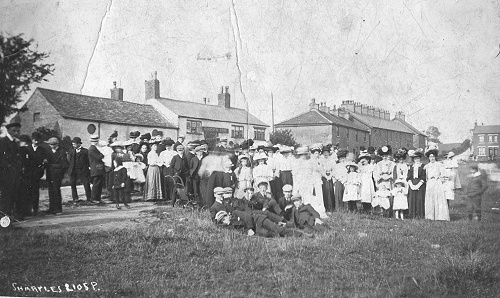 Who made the change and why?

A deed plan connected with the route of the Macclesfield Canal dated 1828 shows a piece of land called the Half Acre (where Half Acre Terrace now stands) and Tithe Records show a Hawk Field nearby.

Barnsfold is long-established. The Domesday Book records fields called ‘Laitone -1 virgate of land here’.  These fields were behind what we now know as Barnsfold.

The virgate was a unit of land area measurement used in medieval England, typically outside the Danelaw and was held to be the amount of land that a team of two oxen could plough in a single annual season. It was nominally thirty acres.A ‘virgater’ would thus be a peasant who occupied or worked this area of land, and a ‘half virgater’ would be a person who occupied or worked about 15 acres. 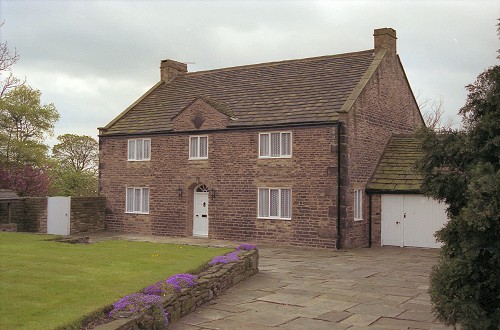 It has long been a farming community and early maps show a tight group of dwellings.  Early censuses record between 75 and 85 people living here, with a wide range of occupations.  Today there are four households, three in dwellings of considerable antiquity, two of which are listed.  A new house was built in 1996, on the foundations, and in the style of a previous farm.

Barnsfold takes its name from George Barnes who was farming there in the 17th century.  He died in 1699 and in his will he left instructions for the setting up of ‘Marple Apprenticing Charity’.  The Trustees could give grants of £8 per annum ‘to apprentice boys to husbandry or useful work’.  To ensure the continuance of the good work, Barnes put covenants on his land requiring tenants to pay a perpetual yearly rent charge of £10 to the charity.  This remained until early this century when it was rescinded.  The charity was finally wound up in 1995, along with several other small local charities which were no longer viable.

At present about 10 people live at Barnsfold but the 1841 census shows that 75 people lived there and by 1851 this had risen to 85.  There were at least eleven dwellings of which seven have since been demolished.  Large families were the norm.  In 1851, three dwellings had eleven occupants, there was one each with ten and nine, two with eight, three with seven, one with four and one with three occupants.

Occupations are connected with the textile industry, the nearby canal (built in 1832), farming, coal mining and the local speciality of hat making.

According to the 1742 Mize and Tithe Book, George Bealey was the principal farmer at Barnsfold at that time.  He must have been a busy man because he was also in charge at Carrington Barn and Boothcote.

Approval for building the Macclesfield Canal was granted in 1826 and it was operational by 1831.  It was intended to provide a high-speed link from the North West to the lucrative markets of the South East.  It was designed by Thomas Telford, the celebrated civil engineer and to aid speedier travel, locks were kept to a minimum, with only one flight at Bosley, south of Macclesfield.  It is 26 miles long.

The canal carried a variety of goods south, including textiles and hats from Stockport which were loaded at the wharf in High Lane which is now the headquarters of the North Cheshire Cruising Club.  However, its ‘bread and butter traffic’ was coal from the Poynton coal field, locally to the lime kilns at Marple, and also to Disley and Bugsworth and to the Potteries.

The railway began to develop soon after the canal was finished, and it simply could not complete with rail transport in terms of speed, so it was never very profitable.

With the development of the steam engine as power for the mills, water power was no longer needed and factories could be built in any convenient location.  At Hawk Green in the mid 1830s, the Shepley family built a large cotton mill beside the canal, so that they could use the canal for transport of raw materials, coal, finished goods and for watering the boilers.

Shepley’s Mill was succeeded in the early years of the 20th century by the even larger Goyt Spinning Mill which again used the canal for transport and boiler water. 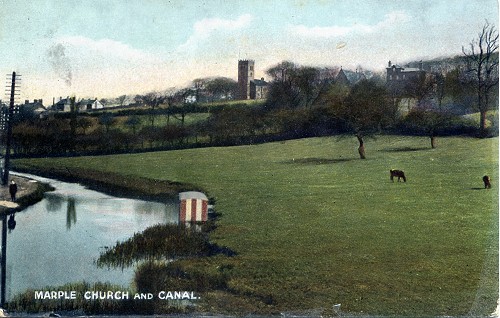 ‘The New Macclesfield Canal to which Royal Assent has just been given, will unite the Peak Forest Canal at Marple with the Trent and Mersey Canal at the Talc o’ th’ Hill, Staffordshire.  This undertaking will be the shortest line of conveyance by twelve miles between Manchester and London and all parts of the south of England and 25 miles nearer to the manufacturing districts of Yorkshire.’

The Macclesfield Canal is renowned for the beauty of its bridges, all listed structures and for its milestones which mark the miles, and in some parts the half and quarter miles as well!  Nowadays, the canal is used almost exclusively by those who like ‘messing about in boats’.  It is part of the Cheshire Ring, a 90 mile circuit which can be travelled in a week or two and takes one through every kind of landscape from the city of Manchester to the most rural parts of Cheshire.’

Aaron Eccles (right) was an Attorney of Hawk Green.  He lived at Beamsmoor, just below the canal.  On Greenwood's 1817 map two buidings are shown, plus a windmill. the house had a variety of occupants after the war, many an aspirant ballerina remembers dancing classes at Beamsmoor School of Dance.

By the early 1980s, the house was riddled with dry rot.Eventually it was demolished and a modern house built.The other dwelling, Beamsmoor Cottage remains (as at 1998).  It dates from 1790.

A steam-powered spinning and weaving mill, known variously as Shepley / Rhode / Rhode House / Ridge / Marple Mill.  It was built by Robert Shepley on the banks of the Macclesfield Canal which was used for transport of coal and raw materials.  The mill had its own gas-making plant and a gain main is shown running towards Rhode House, Shepley’s home.  In April 1926 the warehouse was destroyed by fire and the business folded within a few years.  The building was demolished in the 1930s and the stone used elsewhere.  The Shepley Lane Industrial Estate occupies the site of Rhode Mill.  The canal retaining wall can still be seen from the tow path.

Shepley’s Mill employed several hundred people. Early maps show that there were only a few farms in the area and Robert Shepley must have had the same problem as other mill owners:  how to find enough workers.

Robert Shepley owned a considerable amount of land in Hawk Green and he used some of it to build houses on which he rented to those willing to work in his mill.  The Tithe Map of the 1820s shows few houses, but by 1850 it’s a different story.  Terraced cottages had appeared on Barnsfold, Hazel View and there was a rectangular development at Rhode Houses.

The Barnsfold Road houses and Rhode Houses are brick-built with identical detailing on the window reveals and doorways suggesting that they were built at the same time. Hazel View has a frontage of dressed, coursed stone but random rubble rear walls. Barnsfold and Hazel View back on to an alley where there were a few shared privies. Barnsfold have dressed stone garden walls and Hazel View have a beautiful flagged front path with elegant stone rain water gully.  Rhode Houses have a common back yard with access from Hibbert Lane (for the refuse collector and night soil man?) and these houses had grit stone slab roofs.

It was purely a spinning mill.  It was steam powered and water for the boilers was taken from the canal.  Coal and raw cotton were delivered by canal.  When in full production in the 1930s, it employed nearly 500 people, but the run-down of the cotton industry forced it to close in 1959.  It stood empty for a few years and was then used until 1981 for the manufacture of plastic foam.  Since then it has been divided into small units and more than 80 businesses now have their business in the Goyt Mill.

The Hawk Green branch of The Compstall Co-Operative Industrial Society Ltd opened in 1882 in a shop rented for £15 per annum from Mrs Whitelegge a daughter of Aaron Eccles.  Later they rented these premises from James Shepley for £30 per annum and subsequently bought the shop for £1030.3s.5d.  It traded until the 1960s.

Hawk Green today is a thriving community, which retains its own identity.

Information compiled from the archives by Hilary Atkinson