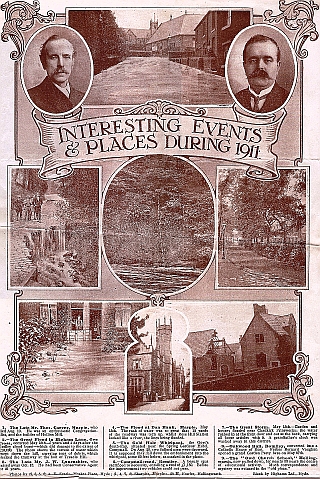 The catalyst for 'Tale of Two Torrents' article, in the archive story section, was a flyer from 1911, donated to the archive. Printed on glossy paper, the photographic block used in its production is quoted as being made by Highams Ltd., Hyde. A piece of ephemera, ephemera can be be defined as ''the minor transient documents of everyday life'.

Details of the photographs (quoted text, from the bottom of the flyer)

1.  The Late Mr. Thos. Carver, Marple, who died Aug. 13th. He was an enthusiastic Congregationalist and the builder of Hollins Mill.

2. The Great Flood in Higham Lane, Gee Cross occurred May 13th-5 years and 4 days after the Godley cloud burst-which did damage to the extent of £20,000. This photo shows the torrent of water which swept down the hill, carrying tons of debris, which blocked the tramway at the foot of Treacle Hill.

3.  The Late Mr J.W.Lancashire, who passed away Oct.13, He had been Conservative Agent for 21 years.

4. The Flood at Dan Bank Marple, May 13th. The rush of water was so great that 12 yards of the roadway was torn up, whilst Rose Hill Station looked like a river, the lines being flooded.

5.  The Gold Hole Whirlpool, the Goyt’s death trap. On August 20, two Salford men were drowned. It is supposed that they fell down the embankment into the whirlpool, some 60 feet below.

6.  Compstall-road, Romiley. A beauty spot sacrificed to necessity, entailing a cost of £1,150, before the improvements two vehicles could not pass.

7.  The Great Storm. May 13th- Garden and houses folded near Chadkirk Printworks: the water rushed in at the front door and out at the back, carrying all lose articles with it. A grandfather’s clock was washed away in this district.

9.  The “Owd Church School”   Hollingworth, now pulled down, for nearly 50 years the centre of educational activity. Much correspondence and mystery was evinced in the “old place”