I am intrigued by two photographs of a cricket bat, one of the bat, the other a crest mounted on the bat (above), which were given to the Society a few days ago by Andrew Mather who owns the bat. Cricket has been a popular sport in the area from the 19th century, with village clubs in Compstall, Hawk Green, High Lane, Marple and Mellor. However, I have never heard or seen any reference to Brabins Cricket Club. Perhaps the club was sponsored by the Hudson family at Brabyns Hall - certainly, permission from the family would have been needed if matches were held in the hall grounds.

I have had more success finding Thomas Thorneley whose name is engraved on the shield. The unusual spelling of his surname helped me to narrow down the candidates when I searched Ancestry. He was born in 1856 in Ludworth and christened at Mellor Parish Church on the 22nd June that year.  His parents were Thomas (a grocer) and Betty and the family liv 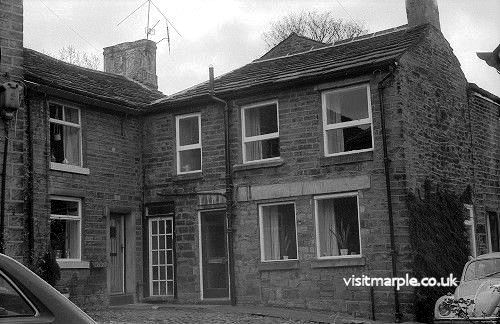 ed at James Square, Marple Bridge. This is near to the Norfolk Arms. In the 1871 census, Thomas, aged 15, was a weaver in a cotton factory.

In 1876, aged 21, he was awarded the bat by Brabins Cricket Club. At that time, over-arm bowling had only been made legal since 1864 and he would probably have had to face a mixture of both types of bowling. Cricket bats have evolved over the years, from the early 16th century when they were like a modern hockey stick to the modern-day cricket bat, which came into play during the 1870s. One big difference between then and now is the bat is much lighter. Thomas’s 1876 bat is made of willow heartwood and weighs about five pounds. In contrast, a modern bat is made from willow sapwood and weighs only half that amount.

I can’t find Thomas in the 1881 census but the next year, he married Martha Mycock at St Peter’s church, Ashton under Lyne and as you will see from the Marriage Register entry, he was a labourer. By 1891 Thomas and Martha were living on Compstall Road, Marple Bridge and this was their address for the next 30 years. In 1911 Thomas was a county roadman, and Martha’s nephew, Thomas Mycock, aged 18, was living with them. The final entry for Thomas is his death in 1927.

There were very many societies and sports clubs in our community before the First World War. If anyone has family records about these clubs and societies and particularly about Brabins Cricket Club, please contact me. This email address is being protected from spambots. You need JavaScript enabled to view it. 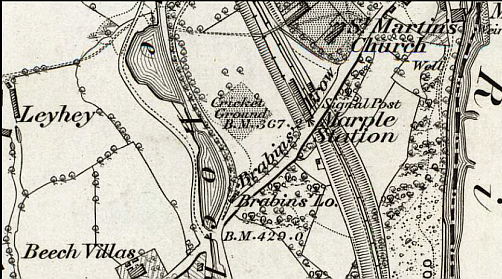 OS Map of 1871,(above) showing the cricket ground 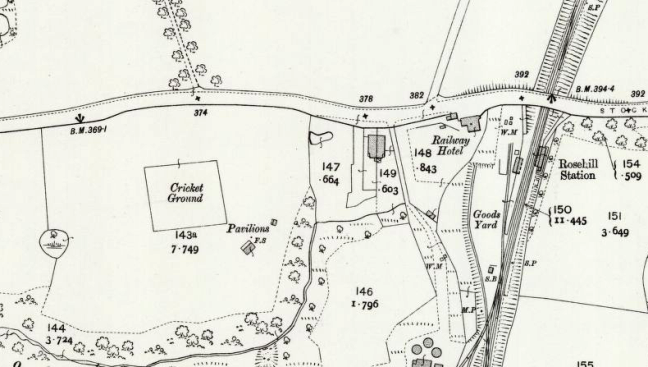 A game in progress at Compstall Cricket Club.

Hawk Green Cricket Club's new pavilion, built at a cost of £70, was opened in July(?) by the president, Miss Barlow

Arthur Nadin was a bowler for Hawk Green cricket club before and after WWII, 1939 to 1944.