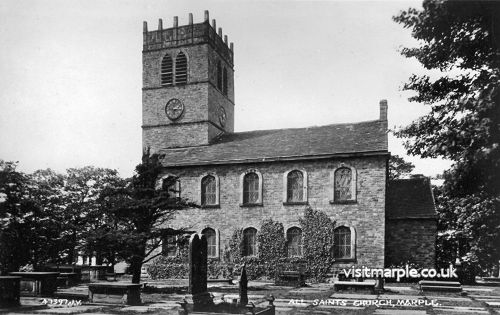 All Saints Old Church
Mr Hulse, a bookseller, purchased two bibles and prayer book from the prisoner and then saw him the next day at Leek having a bag of books and offering a prayer book for a pint of ale. Alcock, a constable of Leek, produced books he had taken from the prisoner, some of which were claimed by Mr Eccles and Mr Isherwood.

The prisoner said he had bought the books in a public house in Manchester.

The Chief Justice summed up the evidence.

The Jury returned a verdict of Guilty. DEATH. Recorded.

We have to wo 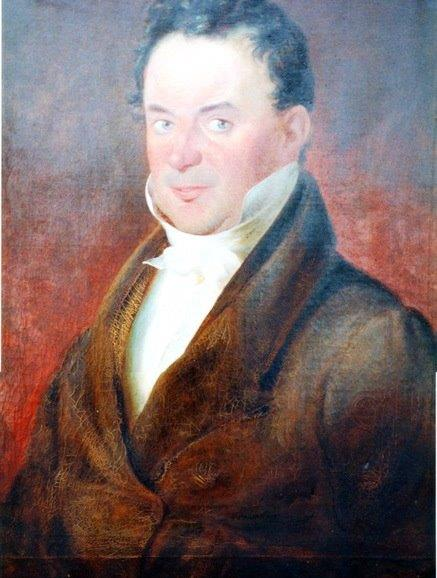 nder why these reports of trials and sentences were reproduced 70 years later without some accompanying comments, maybe as to how attitudes to the sentencing of offenders had changed. In the case of William Jones he is so obviously guilty of the crime but apart from his name we are given no other information. Surely the Judge and Jury would know more!

Did the well-heeled Mr Eccles and Mr Isherwood have no compunction about a sentence of DEATH for such a petty crime? Was it just because the stolen books were bibles and prayer books? Was William Jones included in their prayers that night?

During the 18th century the number of crimes that were punished by hanging rose to about 200 and included minor offences such as picking pockets or stealing food. However, at the time of the trial of William Jones there had been public unrest since the end of the 1700’s against so many people being hanged for petty crimes. It is recorded that at the start of the 19th century the death of a prisoner was often recorded after the guilty verdict but the actual sentence was transportation or imprisonment.

It seems therefore that William had a chance of not being hanged. However his name, crime of sacrilege and sentence are included in a County of Chester list of some 1824 trials and verdicts. Hanging at that time would have probably been a public hanging and apparently this could have been by the short drop, resulting in death by strangulation. More research just might establish William’s fate which hasn’t been confirmed so far. Public hangings were stopped in 1868.

The second extract is from the same paper and date dealing with further proceedings at Chester Assizes. There is again a brief description on our website but a summarised account follows:

John Allen, Isaac Charlesworth and Joseph Ingham indicted for breaking into the house of Joseph Gee of Marple and stealing a quantity of bacon. Thomas Simpson was charged with
feloniously receiving the same.

The first three and John Robinson broke into the cellar of Mr Gee at 4 o’clock in the morning and stole two sides of bacon (pork?) which they concealed in the adjacent canal tunnel of the Peak Forest Canal.

In our archives we have reminiscences of Mr Schofield who tells us of his grandfather describing a recess in the wall of the canal tunnel (what it is now known as the Horse Tunnel). This was for the boatman to stand in to let the horse pass. After the incident of the stolen bacon people used to speak of it as Bacon Hole. The report of this case is in itself rather confusing but the outcome is - The Jury acquitted Ingham and Simpson but found Allen guilty of stealing to the value of thirty-nine shillings. No mention of Charlesworth.

The Court sentenced Allen to be transported for seven years

The name of John Allen, his crime of larceny and sentence of transportation for seven years are in the County of Chester list of 1824 trials and verdicts. He was transported in the same year on the “Lady East,” to Tasmania. 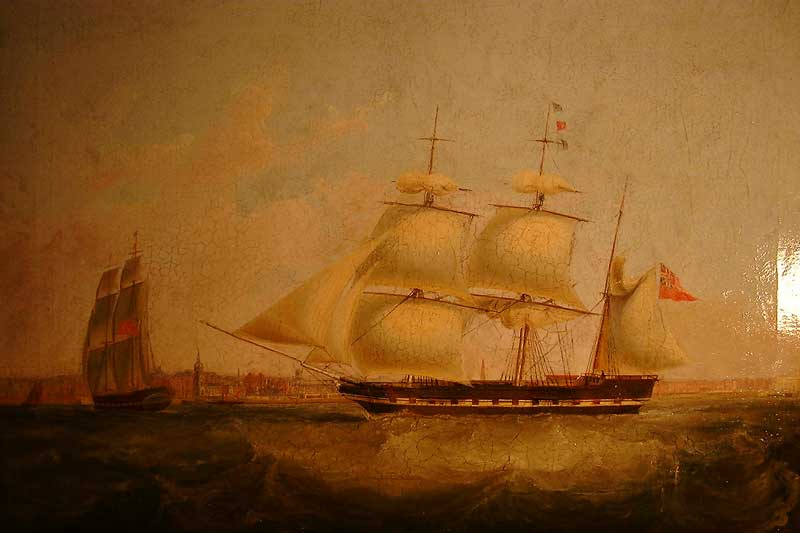 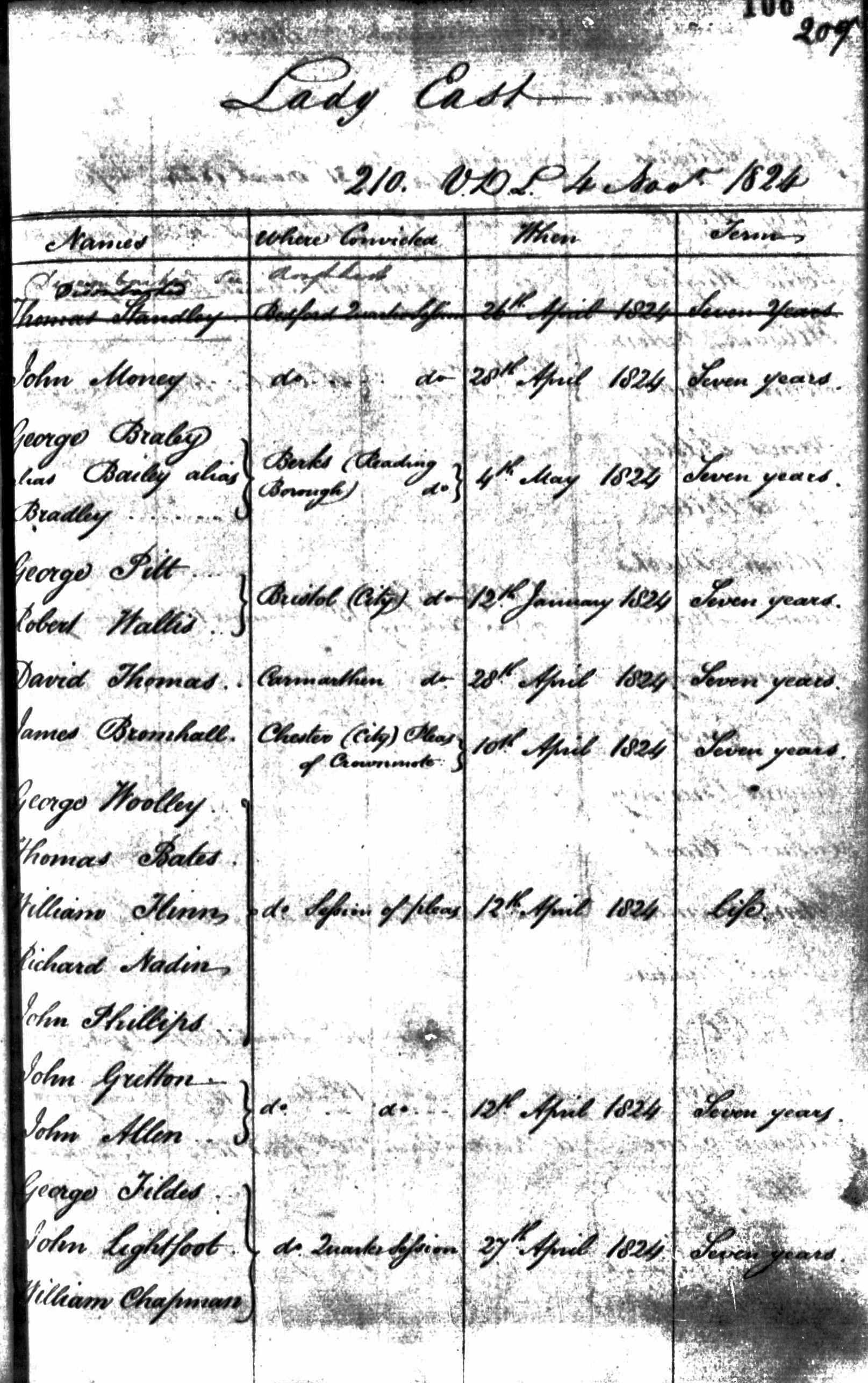 Transportation was favoured for various reasons:

Most of the convicts being transported were male, some were children and some over 80. Many political prisoners were transported including Luddites, Chartists, the Tolpluddle Martyrs and Irish Nationalists. 1824 was too early for the Tolpuddle Martrys.

Conditions on board ship were too atrocious to describe and the work on arrival was hard labouring work on roads, bridges, farms or quarries. Good behaviour could result in a reduced sentence although the majority of convicts decided to remain and have a better life than they might have had at home. It was even possible to do extremely well, as did Henry Angel, a grazier (probably related to my family). He was convicted at Wiltshire Assizes of Highway Robbery, sentenced to Life and transported to Sydney on the Neptune in 1818. He accompanied Hamilton Hume and William Hovell when they discovered the river Murray. Eventually he had an estate of several thousand acres and sixteen children!! (Australian Dictionary of Biography 1969).

Transportation ended in 1857 as many Australians began to object to their country being used as a dumping-ground for Britain’s criminals. Of course many of them might themselves have originally been one of these criminals! 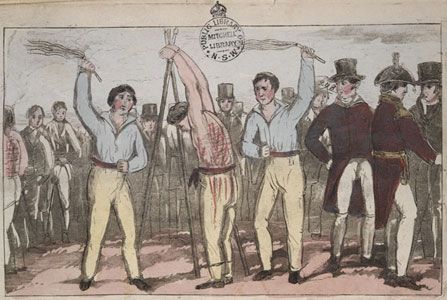 At the time of writing a search for more information about John Allen; e.g. date of birth, family details and his address before transportation, has not been successful, or whether or not he returned to see the Bacon Hole.

So how can we compare 19th century Then and 21st century Now?
Impossible! We can’t compare.
Compassion/empathy seemed to be in short supply Then by those responsible for selecting the punishments.
Crimes unknown in the 19th century abound Now.

“The past is a foreign country, they do things differently there” (L. P. Hartley)