After the food had been eaten,the non-alcoholic punch drunk, the Christmas Party folk settled down to hear an entertaining talk by Warwick Burton on Railway Pubs and Relics. An education for some, including your correspondent,  as Warwick described the past life of some of the local railway pubs, and how he came about to own some railway relics. Warwick who now lives in York, had spent his childhood in Marple, and some of his exploits in those days came to light during the evening.

Back went the audience with Warwick’s help to 1970, schooldays for Warwick. These coincided with the 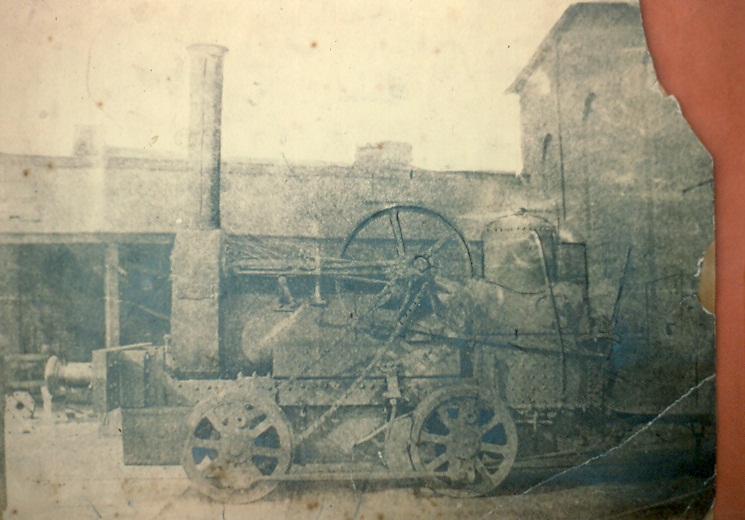 rebuilding of Marple Station. We learnt how, the rather cheeky, schoolboy had ‘cadged’ the now valuable relics, but then merely scrap. At the end of the 1960’s BR (British Railways) had decided to rebuild Marple Station, by then the once fine canopies over the platforms  were in such a state of disrepair that the glass was removed for safety, leaving little shelter from the elements. Warwick, in the middle of the chaos of the rebuild, managed to obtain , for ‘next to nothing’, railway signs, station seating, signals, milepost etc. We did not learn how the schoolboy took things home. Perhaps, help may have come from his father,Councillor ‘Monty’ Burton, also Chairman, at that time, of the Marple Council. Monty flagged away the first train from the rebuilt Marple Station on 28th. October 1970. One of the old stations waiting rooms had a photograph of the first engine to enter the station, Rattlesnake, (above right) a contractor’s locomotive, in June 1863. This photograph was one of the relics saved by the Burtons. Since this talk, the station has finally lost its original footbridge, now with Peak Rail, this has been replaced with a modern version and lifts have been added to give disabled access to trains heading into Manchester. At the closure of route south from Rose Hill station, Warwick obtained signalling equipment for ‘next to nothing’. Romiley Station provided a 12ft. gas lamp, bought for the princely sum of £5. The lamp was mounted in the garden at the Burton’s home in Marple. There it stood until 2005, after the death of Monty, and sale of the house, it has now arrived in York, at Warwick’s home.

Part 2 of Warwick's talk dealt with the railway pubs. As the arrival of the canal had given Marple the Navigation Hotel, the arrival of the railways in the nineteenth century brought to the district three hostelries following a fashion for railway inspired names. Pubs were renamed to keep up with the times. In Marple the Gun Hotel in Rose Hill became the 'Railway Hotel', (pictured at the top left) being extensively rebuilt after the coming of the railway, to deal with new custom. Whilst in Marple Bridge the 'Railway Inn' was born in 1833, this is now the 'Royal Scot'. Meanwhile it took a while longer, until the 1870's before the 'Hare and Hounds' became the 'Midland Hotel' in Marple Bridge.

Warwick left the audience very satisfied, with an humorous talk, on the same night they satisfied themselves with mince pies and trimmings.