1955 view of Marple from the air taken by Gordon Mills showing Hollins Mill before demolition.

Ann had a problem with Hollins Mill. Having just written the definitive book on the subject, how could it be shortened to fit into an hour's talk? Her solution was simple. She concentrated on the owners as that gave a structure to the talk but she still found the time to relate some anecdotes about the people who worked in the mill. In the beginning, before Hollins Mill, there was very little that could be described as Marple. There was a small hamlet called Norbury Smithy (right) at the junction of Stockport Road and Church Lane. Other than that just a few scattered farmsteads and one or two rows of cottages.

Charles Walmsley was a local solicitor in his mid thirties. He had married his boss’s daughter and decided that the future lay with cotton. He bought an estate, built a grand house in the middle of it and then built a four-storey mill with plenty of room for expansion.

He knew little about the cotton industry so he must have had expert advice. The mill seems to have been reasonably successful in the first few years as it employed several hundred people and took in apprentices from all over the country. The Walmsleys also seem to have been good employers by the standards of the day. There were good reports by the workhouse in Boston which sent apprentices to this mill and by the local doctor. Some of the apprentices are buried in the graveyard at All Saints and someone, presumably the Walmsleys, have paid for a gravestone to mark their passing. Unfortunately the family had a series of tragedies. Charles himself died in 1849 and over the next decade his daughter and three of his four sons died. In 1855 the family was declared bankrupt and over the next few years the mill and its contents were sold. The Mill dominated the Village.......

The buyers were a consortium of two families. The Carvers were a very successful cartage company looking to diversify whilst the Hodgkinsons were in the cotton industry but as merchants, not manufacturers. The Carver twins, Thomas and John, were in their late twenties when they came to Marple, leaving their elder brother and their father to run the carrier business. Samuel Hodgkinson was in his mid thirties, a little older than the Carvers, and the more experienced businessman. They could not have taken over at a worse time as the American Civil War resulted in the cotton famine and many of the workers were laid off for long periods. Nevertheless the mill survived. The new owners added a weaving capability to the spinning mill so it was now an integrated factory. They gradually built up a reputation for quality products with hands-on management from Samuel Hodgkinson and Thomas Carver. John Carver was also part of the management team but took a less dominant role than his twin. Both families were strong Congregationalists and equally active in Liberal politics. They were largely responsible for the Congregational church in Hibbert Lane but also contributed to the replacement All Saints Church and many other Marple buildings. Thomas Carver was something of a maverick and he fell out with the church and established the Union Rooms Mission Army, based on the Salvation Army. The headquarters was the newly built Union Rooms, now the Regent Cinema. This also served as a community centre and an alternative to the pubs. Samuel Hodgkinson devoted more time to civic affairs and for many years he was chairman of Marple Local Board which then became Marple UDC.

The company issued public shares in the 1880s but the families still controlled both Hollins Mill and the Wellington Mill in Hazel Grove which had been purchased. The younger generation now began to play a role and many of the large houses of the district were occupied at one time or another by Carvers and Hodgkinsons – Marple Hall, Hollins House, Stonehurst, Beamsmoor, Rosehill House. The company was now at the height of its influence, concentrating on high quality sheeting which was exported worldwide. However, the original patriarchs died in the Edwardian era and the First World War brought in dramatic change. Four of the Carver grandchildren were killed and the remaining family moved away but left a magnificent legacy to the town – the Memorial Park. By this time Walter Bright Hodgkinson, the son of Samuel, was Managing Director but he retired in 1920. At his retirement he presented every employee with an envelope containing amounts varying from ten shillings to six pounds depending on length of service. Of the 450 employees, 19 had worked for over fifty years and 171 for more than twenty years. From this point the family ties were largely broken. The younger generation moved away, the Mill experienced the general problems of the cotton industry and it went through a series of mergers. Eventually, in 1954 it closed for good, 120 years after it had opened. Three years later the mill building was demolished and on 25th October 1957 the chimney finally came down. The end of an era. It had changed Marple out of all recognition. What had been a few scattered hamlets was now a sizeable town and in the sixty years since then the town has continued to change. 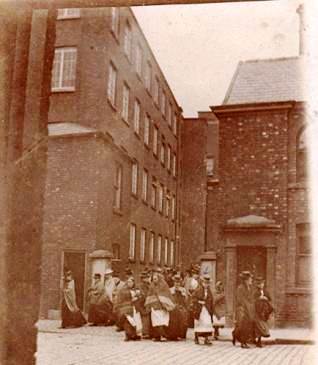 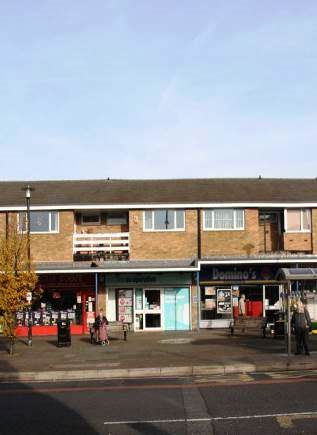 Then & Now: Two photos, left the workers leaving the Hollins Mill via the entrance on Stockport Road around 1890, right Hollins Parade, taken in 2014, by David Burridge.

The mill was vast! The modern road is much wider than the old one with the old kerb line somewhere between the red line at the edge of the bus lay-by and the centre line. This is why there is so much sky in the 2014 picture of the Hollins Parade, that sky would have been hidden behind the mill.