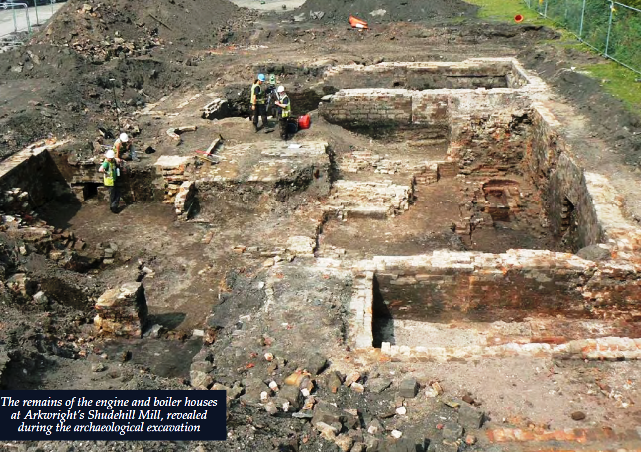 Situated on the northern edge of the city centre, the area known as Shudehill was at the epicentre of Manchester’s phenomenal rise to prominence as a manufacturing centre. Much of it was flattened by bombing in WW2 but it is only in more recent times that proposed development by the CWS has allowed any serious archaeological investigation. In 2005, the site featured on the TV programme Time Team and their 3 day excavation confirmed it was the site of Arkwright's mill. Ten years later, when the area was earmarked for redevelopment, Salford Archaeology led an extensive dig/survey of the site, revealing much more information about housing conditions as well as the evolution of alternative methods of powering early cotton mills. 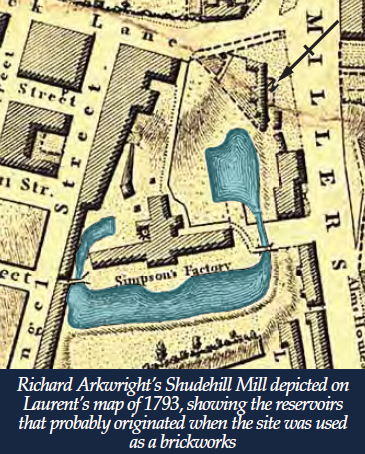 In his discussion of the extensive excavations in Angel Meadow, Ian Miller concentrated on the evolution of Shudehill Mill adding much to our knowledge of the achievements of Richard Arkwright. Yes, we knew him as the developer of the first cotton spinning machine and also as the innovator credited with devising the factory system. From a local perspective he and his son were the financiers behind Samuel Oldknow’s enterprises in our districts. However, Ian demonstrated that he was very much the leading light in the early cotton industry, both as a builder and an innovator. The water frame, the source of his success was patented in 1769 and two years later, in 1771, he completed his first factory, Cromford Mill. These were instantly successful and he quickly began to make serious money.

In 1775 he integrated a mechanical rotary carding machine into his spinning machine line and patented the complete process as a Grand Patent. The following year he opened his second mill at Cromford, followed in quick succession by four more mills in Derbyshire and Lancashire. With each new development he learnt from and improved upon the experience of the last and for his mill in Wirksworth he introduced steam power. At the time all machinery in mills was driven by water power and steam engines were a very new technology. Newcomen engines had been used since the early 1700s as pumps to drain water from mines and Arkwright adapted one for his purposes. It served an auxiliary purpose at Wirksworth, replenishing the mill pond as it emptied but it obviously gave him ideas.

For some time he had aspired to have a mill in Manchester, near the town’s powerful textile merchants. There were a few cotton mills in the area, all on the three main rivers - the Irwell, the Irk and the Medlock. There were few suitable sites fo 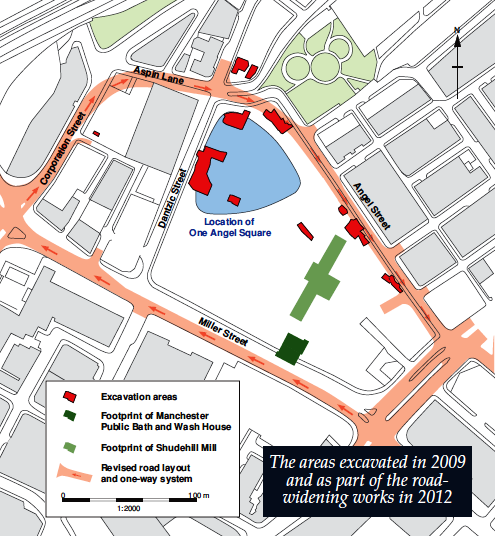 r new mills and Arkwright had an idea when he saw a plot of land in Shudehill advertised for sale in 1780. This was the area later to be known as Angel Meadow, a notorious industrial slum, but at the time it was open country just outside Manchester. In stark contrast to all his previous mills, Shudehill was not served by a river although it was previously the site of a brickworks and contains “plenty of water.” He planned to install a steam-powered pumping engine that would furnish the mill’s waterwheel with a regular and constant source of water. Ever open to new ideas, Arkwright was persuaded by an engine manufacturer, Thomas Hunt, that he could supply a Newcomen type engine which could drive the mill machinery directly. In the event it was too late to abandon the original plan and it was just as well because Hunt’s machine was inadequate to power the mill by itself. The wheel itself was 28 feet in diameter, considerably larger than at Mellor Mill, but it was only 8 feet wide, less than half the width of the Waterloo Wheel.

The excavations, as well as giving important detail about how the system worked, showed that the water used came from a large cistern under the wheel instead of directly from the surface reservoirs. The mill at this stage was not a financial success and Arkwright was anxious to move on although he had proved that a mill could be powered away from fast-flowing streams. In 1784 he sold the mill to his son and two of Richard’s brothers-in-law, leaving them to develop it. This they did very successfully. In 1786 they built a second spinning block and at the same time Richard Jnr. sold his share to John and Samuel Simpson for £20,000 (about £3 million in today’s value.) The Simpsons decided to press ahead with powering the mill machinery directly with a steam engine and to that end they installed a Boulton and Watt 6hp engine in 1791. Two years later they installed a 40hp engine to power the original mill; the steam revolution was well under way. 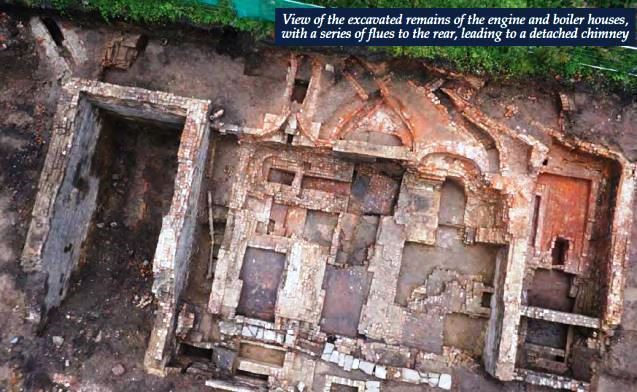 The excavations have given a fascinating history of the progress from water power to steam power and provide a detailed chronicle of the changes and modifications that were made over time in this important period for technology. The Simpsons sold the mill in 1824 but subsequent owners did not fare as well. One of the owners went bankrupt and from 1835 Shudehill was converted for use as a warehouse. In 1854 it burnt down and, although it was rebuilt, it was used for a variety of purposes from that point on. It was finally destroyed by enemy bombs in 1940. There was, however, one more connection with the Arkwrights and Mellor. When Samuel Oldknow died in 1828 the Simpsons rented Mellor Lodge from Richard Arkwright Jnr and came to live here.

It was a fascinating experience following the history of a single building, particularly through some of the most important technological changes in the history of the cotton industry. Ian steered us through a complex history with surety and skill so that even the technophobes in the audience understood the exact sequence of events and their significance.

For more information on the dig and the archaeological excavations follow the link to:

where a pdf can be downloaded.