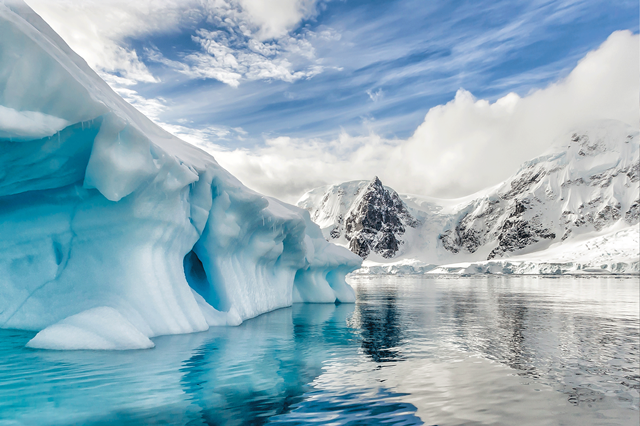 Andy Smith began his talk on Antarctica by listing some superlatives for the seventh continent; perhaps we should examine some of them:

the coldest
No dispute there. The average temperature at Halley Research Station is -6.6⁰C - and that’s in summer! In winter the average is a chilly -28⁰C. And Halley is on the coast. If you want to know inland temperatures they would typically be -20⁰C in summer and, in winter, a bracing -60⁰C.

the driest
Precipitation is usually snow in the form of ‘diamond dust’ - tiny ice crystals formed from water vapour. Halley gets about 250 mm each year but the interior would get less than 50mm. This compares with about 600mm in London and 1050mm in Manchester. So yes, it is dry. 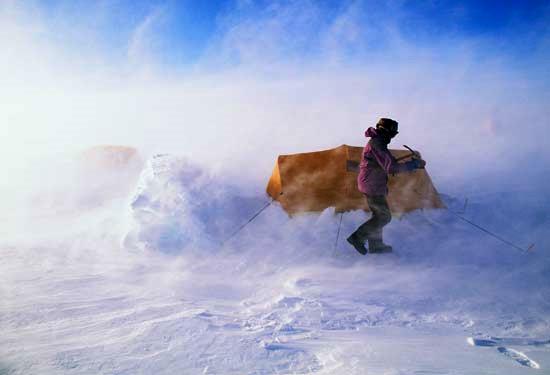 The strong winds are the result of katabatic winds which arise when cold, dense air flows down towards the coast under gravity. Across much of the interior these winds average about 10 mph but towards the edge of the continent slope gradients become steeper. In some places the average annual wind velocity is nearly 50 mph.

The highest point on the icecap is 13,450 feet and the South Pole itself has an elevation of 9,300 ft. The average elevation of the whole continent is 8,200 ft (2,500m).
This visualisation, seen by clicking the image below, gives an idea of the topography of the continent. 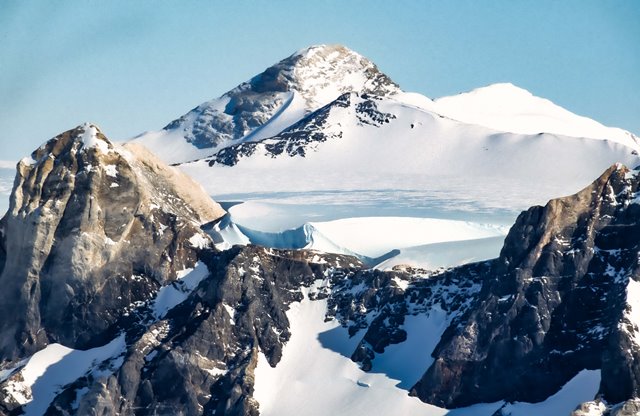 the most remote
There is no question that Antarctica is a long way from anywhere. Taking their nearest points South Africa is about 2400 kms, Australia and New Zealand about 1600 kms and Argentina and Chile about 700 kms. However, the distance from a port in those countries to an effective landing place in Antarctica could be half as much again.

the least populated
There are currently 70 permanent research stations scattered across the continent of Antarctica, which represent 29 countries from every continent on Earth. Eighteen countries operate year-round scientific research stations on the continent and the surrounding islands and during summer as many as 10,000 scientists and support staff work there, but only about 1000 in winter.
In recent years a substantial tourist trade has developed with wealthy tourists taking luxury cruises to the area. However, as they live on board ship they cannot be classed as resident. Almost all of these cruises confine their trip to the Antarctic Peninsula rather than the continental ice sheet. 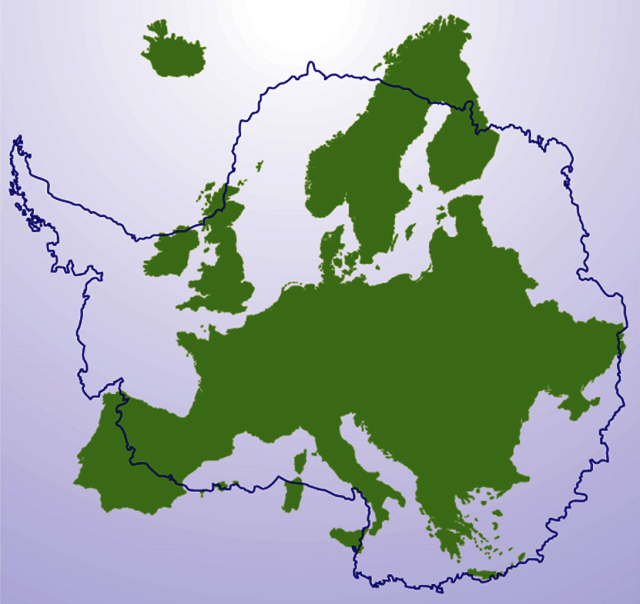 So, Andy made his case in no uncertain terms but he could have added another aspect - size. Although Antarctica is not the biggest, it is certainly large as this comparison of the continent with Europe demonstates.

However, the majority of Andy’s talk was about life on a research station and the particular problems posed by Antarctica. The first question he asked was “Why go at all.” The answer was mainly for science and research but politics does play a part in this work. Despite the explorations of Amundsen, Scott and Shackleton, no consistent interest had been shown in the area until the International Geophysical Year in 1957/58 (which actually lasted eighteen months.) This was an international project involving 67 countries and eleven earth sciences. A substantial part of the scientific activity was concentrated on Antarctica and many of the research stations now present were first established at this time including the American base, Amundsen-Scott, at the South Pole, and the Russian Vostok which is at the southern ‘Pole of Cold.’ 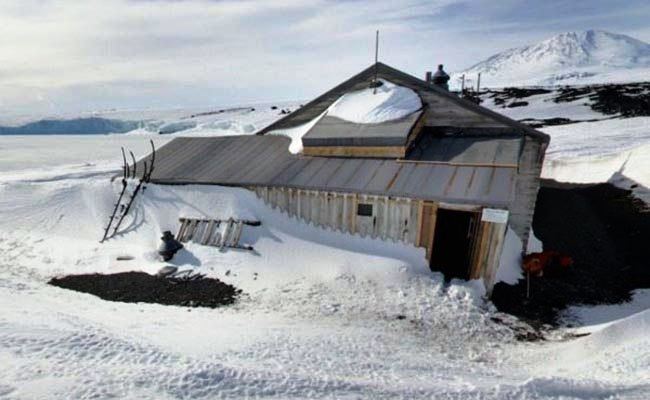 Scott Hut (click the image to see the interior)

The initial station, Halley 1, named after the astronomer, consisted of simple wooden huts built directly on the ice, in much the same way as Scott’s, forty five years previously. This proved susceptible to drifting snows and the buildings were slowly buried. New additions were eventually added on the surface, creating a multi-level structure that reached beneath the ice. This caused its own problems, low temperatures being a big concern. The station was buried beneath 14m of snow and ice by the time it was abandoned in 1968.

This was built with the challenge of drifting snow in mind. Although it was also built directly on the ice, the second iteration of the station featured steel-reinforced roofing to cope with the weight of the snow. Unfortunately, the steel proved no match for the Antarctic ice; the station was only operational for 7 years. A new approach was needed.

The third design took on the challenge posed by burial by placing wooden huts inside long corrugated steel tubes which were designed to be covered by the snow and withstand the pressure. While the concept worked initially, it also revealed further issues, namely with insulation; heat escaped from the buildings and caused the surrounding ice to move faster than expected, distorting the protective structure. Halley III was eventually crushed, and emerged from the Brunt Ice Shelf several years later encased in a calving iceberg.

The lessons learnt were applied to Halley IV. This time interlocking plywood panels were used for the tube shape, complete with specially designed insulation gaps. Unfortunately the wood was warped by the winds, reducing the effectiveness of the cylinder shape, so snow had to be cleared from the roof on a regular basis throughout its life. The unexpected challenges that come when translating theory in to practice in a harsh environment are difficult to control.

Halley V looked very different from its predecessors. Rather than combating snow-drift through burial, the station was elevated on stilts so it sat 4m above the surface of the snow. The legs could be independently adjusted by a team of welders, allowing for corrections in height and for any distortions caused by moving ice. The elevation solution has also been employed by many other nations, both on the ice and on a rock base. This design was very successful but another problem forced its demise. As the Brunt Ice Shelf was moving towards the sea, there was a growing risk of losing the station in a calving event. 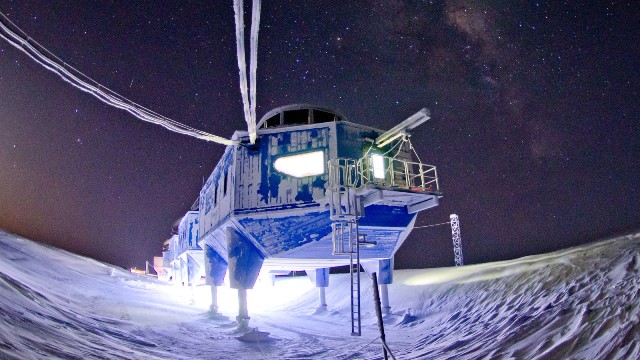 Click the image to see the central pod, and compare with Scotts Hut

As a result relocation capability was specified in the design brief for Halley VI. Construction began in 2008 and it took four years to build, being officially opened in 2013. The completed station consists of five linked modules on hydraulic legs fitted with skis, enabling the units to be towed into new positions. 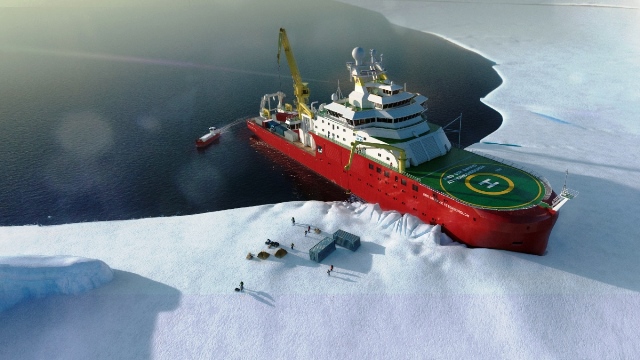 Andy also described the ships used by the British Antarctic Survey but he must have been rather embarrassed by the public vote for Boaty McBoatface as he made no mention of the controversy. When a new vessel was being built for polar scientific research the public were asked to choose a name and ‘Boaty McBoatface’ won overwhelmingly. However, it was decided that this was not suitable for a serious scientific project so it was named RRS David Attenborough. (right) As a consolation the name was given to one of the three robotic auto subs carried by the research ship.

(click the image to see the interior of the ship)

After this description of the unique problems of living in Antarctica, Andy rounded off his talk by summarising the international co-operation that has developed over the years in this unique region.

Before the IGY several nations had made territorial claims based on their control of lands in the Southern Ocean. Several of these claims conflicted, in particular those by Britain, Argentina and Chile which had a differing understanding of which territories they controlled. Both during and after the IGY there was considerable co-operation between scientists on various projects and this led to these claims being put into abeyance. None of the claims have international recognition and, under the Antarctic Treaty System, the respective countries do not attempt to enforce their claims. In addition the work of the IGY led directly to the Antarctic Treaty, which called for the use of Antarctica for peaceful purposes and cooperative scientific research. Since then, international cooperation has led to protecting the Antarctic environment, preserving historic sites, and conserving the animals and plants. Today, 41 nations have signed the Treaty and international collaborative research continues.

Perhaps this shows a way forward for the nations of the world to co-operate and to live in peace.

History of the British Antartic Survey

The Age of Exploration: 90 Degrees South is a documentary comprised of footage shot by Herbert G. Ponting of Scott and his men in previous voyages to the Antarctic in 1910 and 1911, combined with photos and journal entries of the fatal 1911-12 mission, that serves as a tribute to the bravery and determination of these doomed but valiant men.