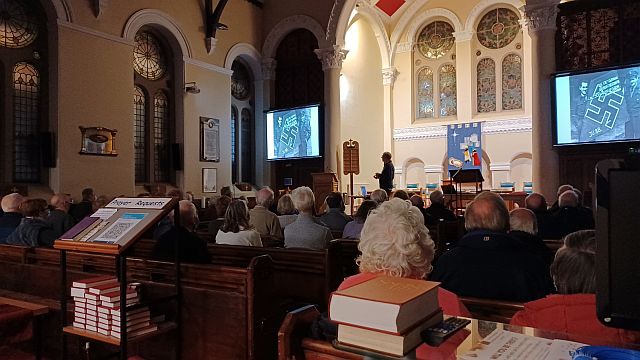 There cannot have been many occasions when the Methodist Church in Marple displayed two large swastikas on either side of the chancel, but our January meeting was one of them. Admittedly, they were only there momentarily as one of the illustrations for Frank Pleszak’s talk about the bombing of New Mills but they brought to life a largely forgotten incident which happened almost eighty years ago.

Frank started his talk by emphasising that, despite his name, he is a born and bred Mancunian. His father was Polish so, as a slight diversion, he very briefly related his father’s adventures in getting to England from a village in what is now Belarus. When the Russians invaded he was imprisoned in a Siberian gulag about as far from Europe as it’s possible to get but despite that he managed to make his way to Europe to fight with the Polish forces in Italy. A fascinating tale but if we want to know more we will have to go to another of Frank’s talks or buy his book. (Details on Frank’s blog. link )

Now, back to New Mills as that was where Frank first found out about this incident; a minor event in the course of the war but a major and tragic event for both New Mills and Hayfield. By 1942 Britain had endured the worst of the bombing. The Battle of Britain 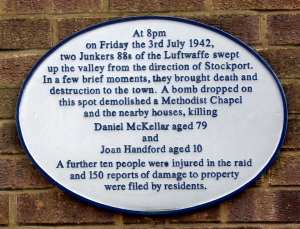 was long over and the Blitz, horrendous while it lasted, had come to an end when Germany invaded Russia. However, there was still ongoing strategic bombing and the horrors of the V1 and V2 campaigns were still to come. Opposite the old workhouse in New Mills there is a small plaque (left) on the wall of the fire station, commemorating two people killed by a bomb which destroyed the Methodist Chapel on 3rd July 1942.

This was one of many targeted bombings by the Luftwaffe but the target was not New Mills, it was the de Havilland factory at Lostock, near Bolton, a key manufacturer of propellers. It was a difficult target as it was at the extreme range from German bases, but two experienced pilots convinced their superiors that it was feasible. It had to be a daylight raid with a route over the sea as much as possible, flying at a low level. From Brittany it went to Land’s End then up the Irish Sea to the Isle of Man where the planes turned east and flew over the Fylde to Bolton.

However, the cloud cover was much lower than forecast and the two bombers crossed the coast further south than planned. They could not locate the target and, as they had no spare fuel, they carried on south easterly, crossing over Trafford Park and Stockport before flying low up the Goyt valley. They decided that they should try to cause some damage to their enemy by dropping bombs and machine gunning civilians; a lighter bomb load meant a lighter and faster aeroplane. (Intended route)

The bombs were dropped towards what seemed to be industrial targets and any large crowds of people were shot at. Very little damage was caused but a great deal of alarm as it was a light evening and a cricket match was being played. However, in Low Leighton the Wesleyan Chapel was hit together with adjacent houses and a ten year old girl was killed. The two Ju 88s then carried on along the Sett valley and reaped similar mayhem in Hayfield, where six people were killed. They flew over

the High Peak and dropped the last of their bombs on Darlton Quarry, near Stoney Middleton. As a final gesture they strafed Chatsworth House before heading for home. (route across Derbyshire)

Low Leighton Road with Whitfield Villas and the Wesleyan Chapel

(click image to see: The remains of the Wesleyan Chapel and Whitfield Villas after the bombing with Ollersett View Hospital beyond)

However, by now the Royal Observer Corps were well aware of their presence and their route and RAF units were given advance warning of their approach. 303 Squadron, composed largely of Polish veterans of the Battle of Britain, was based at Kirton, near Lincoln. Two Sections were scrambled, and searched for the intruders. They were spotted flying east at a very low level and attacked from the rear. They had been caught by surprise so although they fought back and immediately split up, one was quickly trapped and crashed into a farm building, killing all four crew members. The other plane had its starboard engine on fire and crash landed in a corn field. All four crew were unhurt but were captured by farmers with pitchforks before being handed into custody. All four of the Polish pilots involved were awarded half a kill each.

So what happened afterwards? The civilians killed were buried in local graveyards and they are remembered on appropriate war memorials. 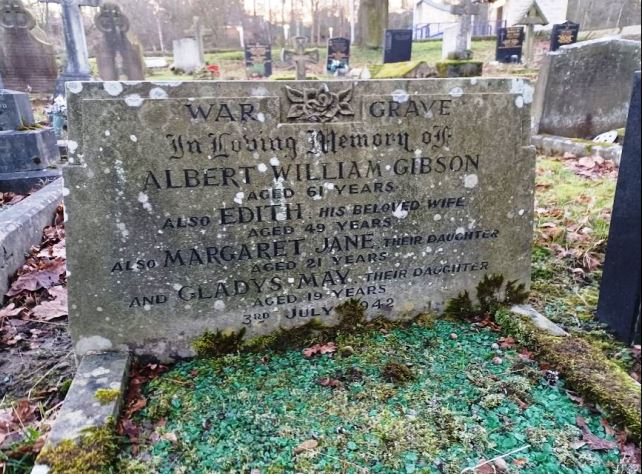 Why St Martin’s? Because Albert junior and his wife lived in one of the cottages at the bottom of Brabyn’s Brow and it was he who arranged the funeral.

Albert junior was killed eighteen months after the rest of his family at Monte Cassino (10/9/43)and is commemorated on the War Memorial inside the church.

Of the four Polish pilots, two were killed in the course of the war, one emigrated to Canada and worked as an instructor for the Royal Canadian Air Force and one returned to Poland. He joined the post war Polish Air Force but was expelled for political reasons. He died in Warsaw in 1980. The four Germans killed are buried in the German Military Cemetery at Cannock.

A fascinating tale and one that tells us much about some of the lesser known aspects of the war. Frank has done a superb job in pulling it all together and tying up the loose ends. Thank you Frank.