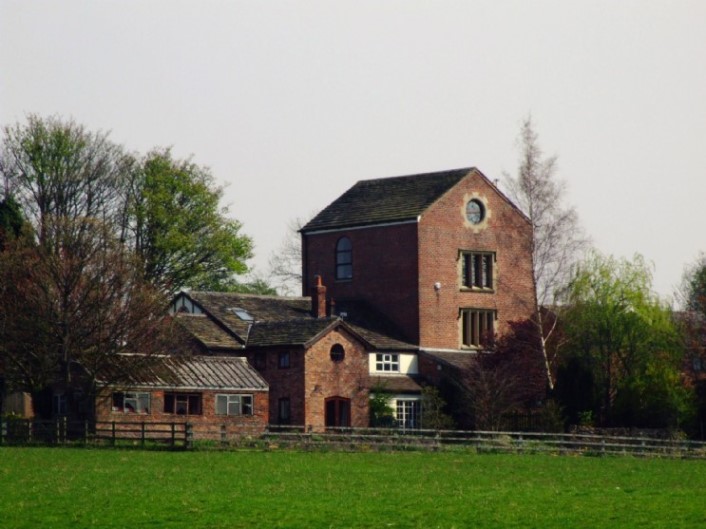 Norbury Colliery was full of surprises as David Kitching explained in his popular talk. With many more visitors than usual, it obviously attracted a wider audience from our area, not just the history buffs.

So what were the surprises? For a start Norbury Colliery was a lot older than we had thought. The first record dates from 1704 so coal was being mined here in the seventeenth century. It was also much bigger than it appears today. Now it is on one site, around Jackson’s Dairies, but in its prime there were three separate collieries. As well as the one we know at Norbury there was also one adjacent to the old High Lane station, just off the A6 on the Middlewood Way and a third colliery at Middlewood itself. Finally, we discovered that these collieries had their very own canal and very own railway, albeit not a very big canal and only a short-lived railway. 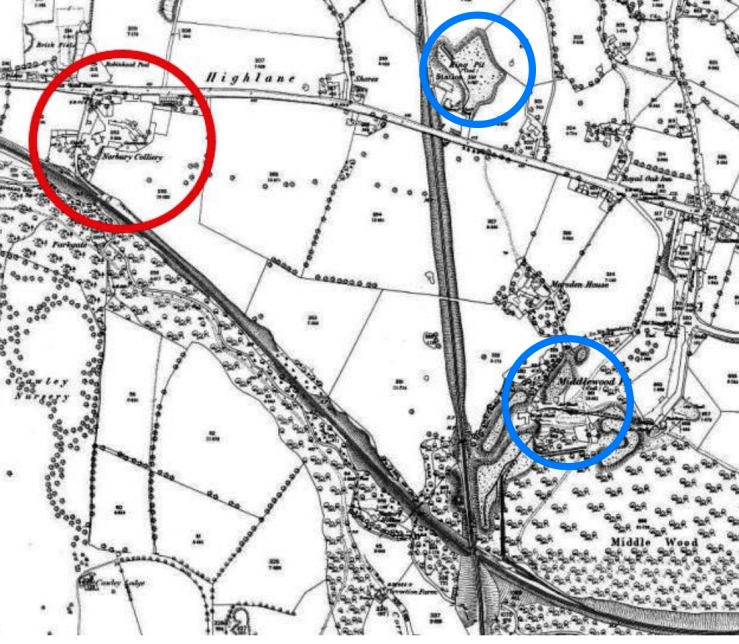 click the image to see 'Poynton Collieries: the Early Years' 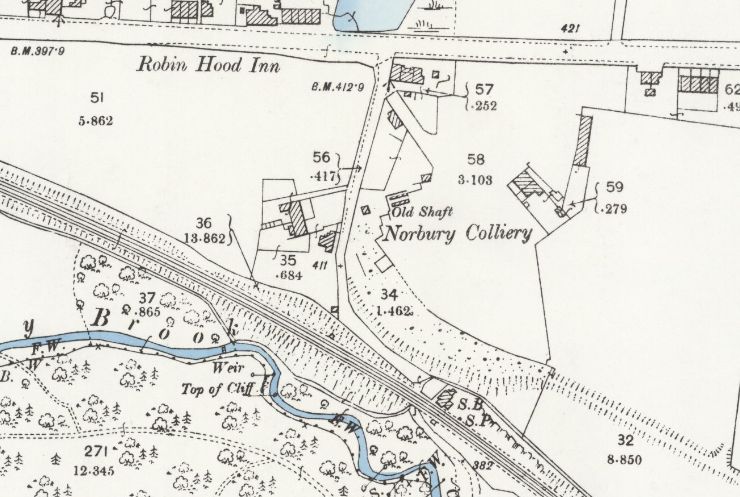 However, to begin at the beginning, this was on land owned by the Lees of Lyme Hall and, in the early days, the Leghs worked the pits directly, not subcontracting to a specialist company or agent. They owned valuable mines in the vicinity of Haydock but this mine was close to where they lived at Lyme Hall so it often served for experiments or the trial of new ideas. One such was in 1707 when a waterwheel was installed to pump water out of the workings more efficiently. This required a joint venture with Edward Warren who owned the Poynton mines on the other side of Norbury Brook. These were not worked directly by Warren but at that time were leased.

Flooding was a continual problem with these mines and an early steam-powered pump was installed in 1749 and a more powerful version a few years later. And it was a problem faced by Nathaniel Wright, the man who would soon buy the Brabyns estate in Marple as a mark of his commercial success. Wright came from a mining family at Crich in Derbyshire but he had risen in the world and in 1793, in partnership with Matthew Pickford, the Poynton-based wagoner, he took out a lease on one of the Warren family mines. Two years later in 1795 he was brought in to run the Legh family mines in the area as well. Wright was both an advocate of new technology and very ambitious, both traits being demonstrated in his operation of Norbury Colliery. 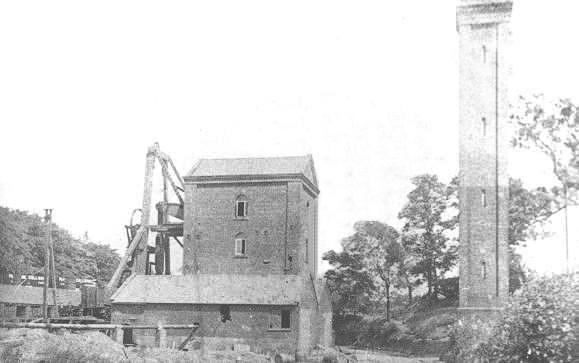 The Newcomen or atmospheric engine had served its purpose well, particularly in collieries but it had one major problem in that it used energy inefficiently and was therefore expensive to operate. James Watt made a very important improvement to this design by moving the condenser away from the cylinder. This resulted in a dramatic reduction in fuel costs and its use spread rapidly. However, Watt knew the value of his invention, he patented it comprehensively and charged a high price for the new design. Nathaniel Wright, a practical man, thought he could get round the patent and developed an alternative design with a Salford engineering firm.

Unfortunately for Wright, Boulton and Watt got to hear about this possible counterfeit and commissioned a spy to make a report. He found out the essential details of Wright’s design and reported it to Boulton and Watt who took up the matter vigorously. Wright had to settle with them on their terms. However, that did not deter him from ambitious plans. He brought in John Clayton as a partner when he was in need of more capital and he explored ways of getting coal to Stockport by way of a dedicated canal, though this scheme came to naught.

Nathaniel’s son John inherited his father’s wealth but not his entrepreneurial instincts so he sold his share in Norbury Colliery to John Clayton in 1826. From then until the end of the century the Clayton family controlled the colliery in one guise or another in combination with the Brook and Shaw families, all of which intermarried. Developments continued and Clayton & Brook financed a short arm of the Macclesfield Canal to link with the Middlewood pits and a rail link for the King and Queen pits in High Lane to the Great Central Railway and the national rail network. 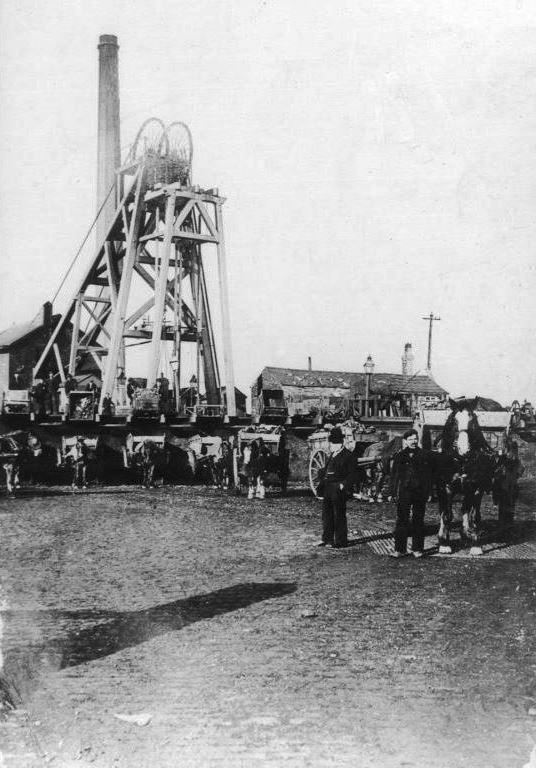 (David mentioned that this may resemble the pithead at Norbury, of which no photo has been found)

This was a very substantial business for most of the nineteenth century, typically producing 60 - 80,000 tons per year and employing upwards of 250 men. With production as buoyant as this, the mines were extremely profitable, as evidenced by John Clayton’s will. When he died in 1861 he left £1.7mill. However, good times could not last forever. As well as competition from the very productive Yorkshire coalfield, many of the seams in the Norbury collieries were becoming worked out. By 1870 the Middlewood pits had been closed and in 1895 the Clayton companies had ceased operations. However, it was not the end of mining. One of the company’s clerks, Joseph Wright, took over the operation and worked it at a much reduced level. In 1901 he was a widower, living in Middlewood View in High Lane. Middlewood View is the two terraced rows on the A6, just south of the Royal Oak at the point where Middlewood Road meets the main road. At that time he describes himself as a coal merchant so he was probably using the mine as the source for selling domestic coal locally. Ten years later in 1911 he describes himself as a colliery proprietor so perhaps by that stage he was concentrating on running the mine and letting others do the sales. He finally gave up the colliery in 1917 at the age of 78 when it was producing about 700 tons per year. It had given him a comfortable living but it was certainly not the ‘goldmine’ it had been for the Clayton family. He died in 1921 at the age of 83, leaving the modern day equivalent of about £60,000 to his unmarried daughter who had kept house for him since his wife had died in 1879. Even that was not the end and other miners took over, surviving as a going concern until 1927 when it really was THE END.

Thank you David, for such an interesting excursion into a little-known aspect of High Lane’s industrial history.

The engine's origin is unclear. It was possibly first installed at Norbury Coal Works about 9 miles to the west from where the Manchester Mercury for 9 October 1764 carried an advertisement for a 'Fire Engine' for sale. Its cylinder dimensions matched the Fairbottom engine.

Fairbottom Bobs is preserved at the Henry Ford Museum in Dearborn, Michigan

Filmed by Keystone in 1911 for the LNWR ( London & North Western Railway ) who had their own full time film unit.

The colliery featured was Alexandra Colliery of Wigan Coal & Iron Co Ltd. Shafts were sunk at the colliery from 1856 in an ancient mining district, records going back to the 14th century.

The shaft eventually reached 772 yards and the Arley seam. The famous Haigh Cannel seam was also accessed. The colliery closed in June 1955.