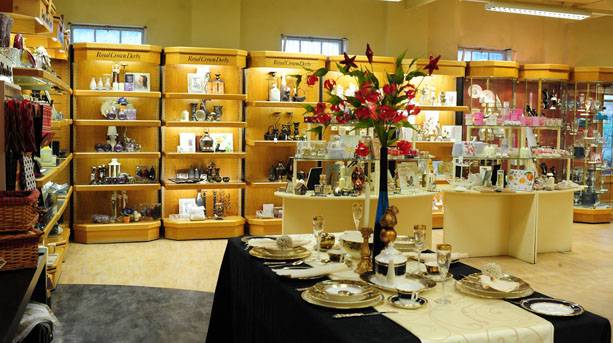 Tuesday 6th March dawned sunny and bright, a splendid day. But it was on Wednesday 7th that MLHS went to Derby and it was cold, grey and wet! However, the coach was on time and we were soon on our way to High Lane and on across the Peaks to Derby.

By the time we arrived at the factory the rain had stopped and we quickly disembarked and trooped into the customary coffee shop with toilet facilities, while Judith established the precise arrangements for the day.

We were split into 3 parties of 12 and after ejecting one non-Marple person from the first group our guide whisked us away through rooms in the midst of decorating for a Royal Jubilee exhibition.

We were told that photography was not allowed so I’m afraid any illustrations accompanying this report will only show the gift shop and exterior of the factory. We were also instructed that we must not touch anything the guide did not pass to us. If we did it might cost us £500 to get out as there would be a complicated process to remove any gold that had attached itself to our skin. Thus prepared, we went out into the sunshine before entering the factory proper.

We were shown how “slip” was poured into moulds to make the basic items. After removal from the mould it is checked by a “fettler” before being baked in a kiln for many hours. This produces a surprisingly strong item as our guide demonstrated by picking up a zebra and bringing it crashing down onto a bench. She did not repeat the action with a crocodile which had yet to visit the kiln!

Later the goods were passed through a “rumbler”, a machine where they were vibrated and abraded by hardwood and silica chips to produce a smooth surface ready for glazing. (A mixture of crushed glass and water with a touch of glue is painted on and then baked in an oven)

At this point all the goods have a plain white glossy appearance. We then entered the decorating room, having been instructed not to talk to the girls as they were on piecework and would not appreciate the distraction. Until 1937 all decorating had been done by hand but now it was applied using lithographs produced by a silk screen printing process. These are applied carefully by hand and smoothed into place before passing through a kiln to remove the backing film and fix the colours. 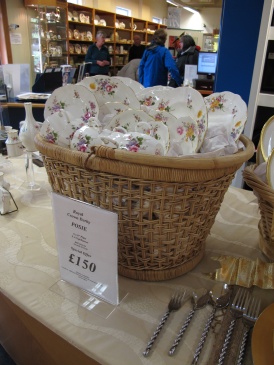 Finally the gold is added before a final visit to the kilns and thence to the inspection process. Apparently 80% is best quality and 20% seconds, although most people would not spot the difference. All their wares are marked with a crown. If seconds, part of the crown will be missing. Also visible on the bottom will be the gilder’s and lithographer’s marks.

After watching three artists hand painting special orders we were shepherded to the museum, being regaled with tales of royal punctuality (or lack of it!) on the way.

The visit concluded with lunch in the “Duesbury Café” excellent value for money and served on Crown Derby plates followed by a look around the shop. Some people even bought things.

Most of the journey home took place in glorious sunshine and the sight of lambs gamboling beside the dry stone walls brought an end to another splendid day.