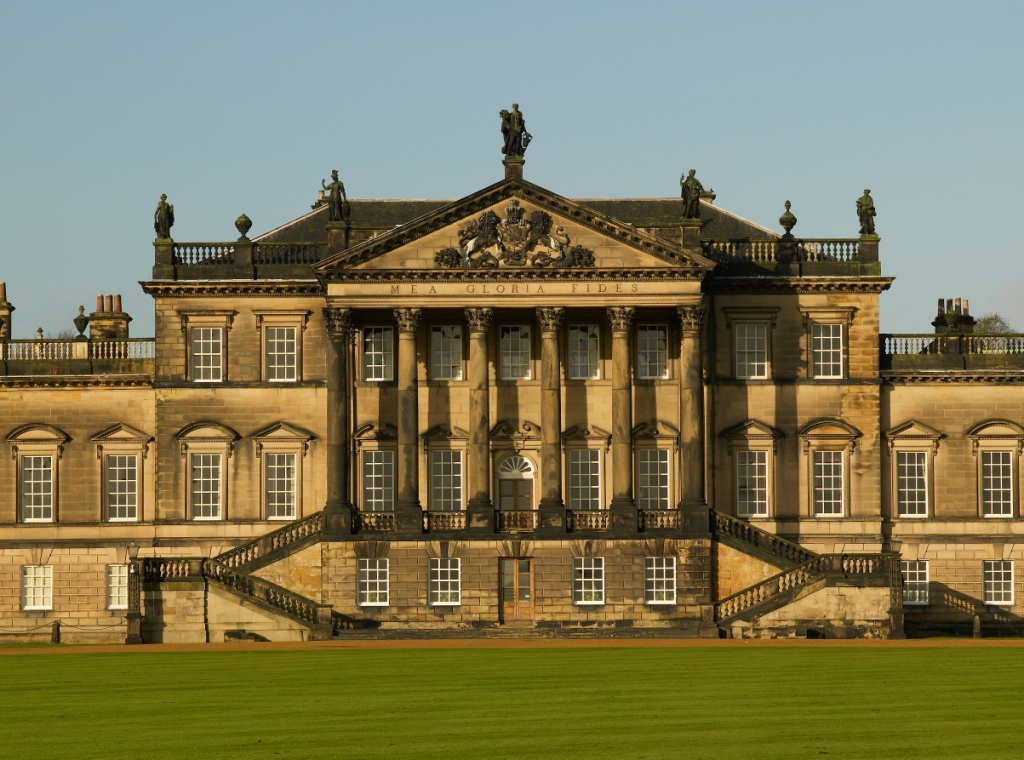 There was no problem with finding Wentworth Woodhouse. With 365 rooms, it is the biggest house in Europe. Quite a contrast to the miners’ cottages that we passed on the way there. However it might not have 365 rooms as our friendly guides wouldn’t confirm that. How do you classify a corridor with eight fireplaces or a cupboard bigger than a bathroom? We hoped to understand this problem once we got inside the house but where wa 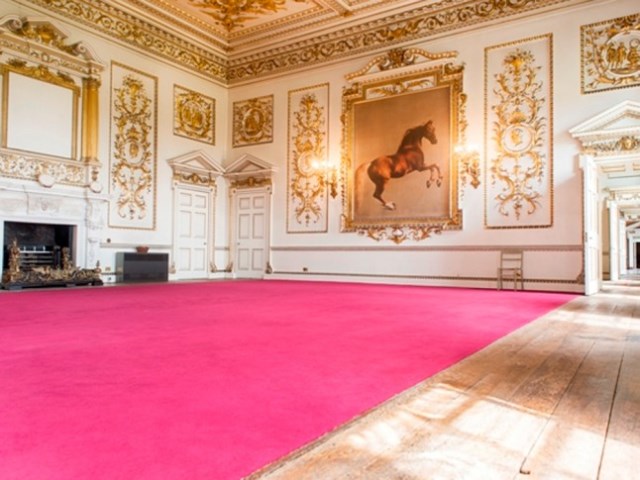 s the front door? It began as a Jacobean house with a gateway by Inigo Jones and that is still the core of the house as nothing is ever knocked down. The first Marquess wanted something rather grander so he grafted a very large baroque house onto it - the west front.

Unfortunately, he had not been keeping an eye on fashion. The Whig aristocracy (and Rockingham aspired to join this elite) had decided that baroque was old hat and foreign and Tory. Instead they wanted a clean, modern design so they reached back 200 years to Andrea Palladio. As before, the baroque was left in place facing west and a whole new front was built on, facing east.

But that left us with a big question. Which was the front? The Inigo Jones gateway? The baroque west front? The Palladian east front? Judith chose the latter but there were a lot of openings in the 606 foot façade. She chose one that was 303 feet from one end and fortunately Robert, with a healthy growth of mutton-chop whiskers, answered the door.

We were all ushered in to the ent 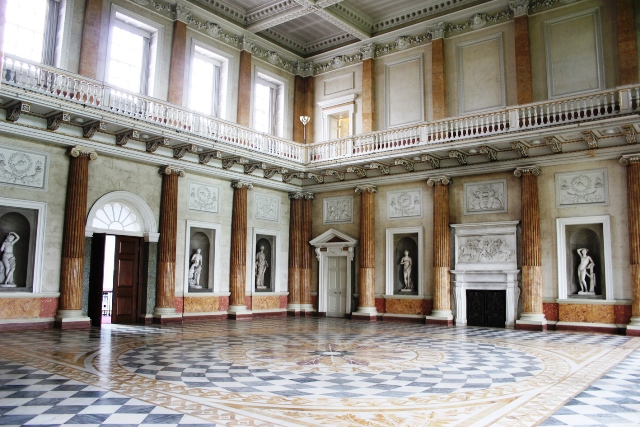 rance hall but, in truth, it was a trifle disappointing. It was large enough but had a relatively low roof and umpteen pillars holding up that roof. It looked a bit like the Great Mosque of Córdoba without the sunshine. However, through the pillars, we could glimpse a very imposing staircase flowing upwards and diverging in the grand manner. The penny dropped. This wasn’t the main entrance. This was merely the ground floor where the cafe was situated. Proper guests went up the outside staircase to the imposing first floor - the piano nobile as it’s known in Yorkshire. We couldn’t wait but we did. Morning coffee always comes first.

The Marble Hall (above) was superb. Stupendous, even. In architectural terms it was “the perfect room.” If you would like to have a perfect room in your house the dimensions are sixty feet wide, sixty feet deep and forty feet high. A balcony half way up is optional but if you have one it should be ten feet wide and run round all four sides. The rest of the house was imposing but perhaps not quite perfect. There were some lovely rooms but a lot of spaces on the walls. 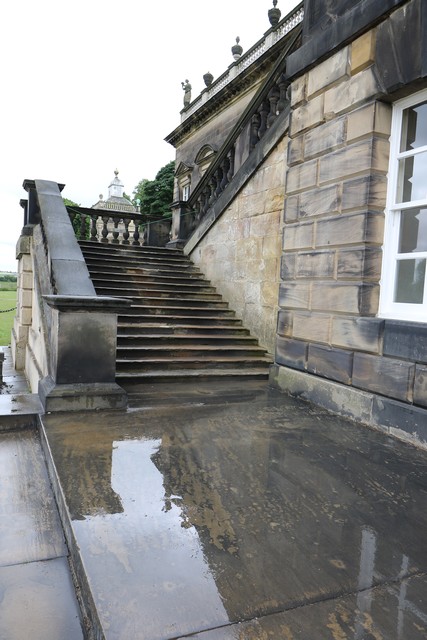 The owners of the estate were rich long before the Industrial Revolution. The second earl was prime minister twice and others in the family were political movers and shakers in the eighteenth century. They then discovered that they were sitting on some of the richest coal seams in the country which added to their fortune. Two hundred years of mining revenues ended abruptly on 1st January 1947 when the mines were nationalised. The government needed coal but it also disliked aristocrats. As a result it ordered open cast mining to be carried out almost to the house itself. The family were regarded as good employers in the district and the local NUM branch appealed on their behalf but to no avail - opencast mining came right up to the house. Worse was to follow. Three deaths within ten years meant three sets of death duties at penal rates and the family no longer had an income from the mines.

Which all explained why so much was missing from the rooms we saw. There were copies of famous paintings, parts of film sets, borrowed furniture but throughout, a feeling of incompleteness. The house has been bought by a private individual with a love of architecture and is now looked after by a Trust. The basic weatherproofing has been carried out and a legal case against the Coal Board has been funded and won but there is a long way to go. They know where most of the contents are and they have high hopes of borrowing them when the time comes but a lot of work is needed before the house will be ready. Forty million pounds worth to be exact. Which leads on to more fundamental questions. Should all these houses be saved? Should this particular house be saved? Should it have a useful purpose or become a museum piece? All questions we couldn’t answer and nor could we come up with the money. We left in a positive but thoughtful mood.

Our next visit was in sharp contrast by Judith’s design. A seventeenth century ironworks which made cannonballs for the Civil War. Wortl 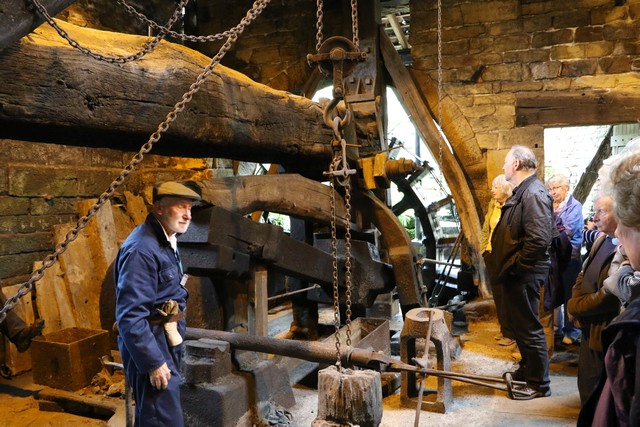 ey Top Forge was just one of many water-powered enterprises using the iron ore field which stretched from Rotherham to Barnsley. There were 24 small works in the area but these were centralised and specialised over time and this particular forge found a niche making axles for railway wagons. However, the Bessemer converters Sheffield proved to be formidable competition and the forge closed down in 1910. Fortunately local volunteers with an interest in engineering are steadily conserving and improving the site under the auspices of English Heritage, though this can be more of a hindrance than a help at times.

Wrong house. You want next door but one.

The puddle, the steps

The crest on the stables gates

A light, a house, a story

One man and not his bus, the penalty of oversleeping

The story of the forge is expounded

The first view of a water wheel

Chocolate that doesn't melt, just you wait and see

Gathering to hear the story

One I prepared earlier

Tools of the trades

Is a quorom present ?

Tea is served, and enjoyed !

A machine tool is put out to grass.

A model, and some chat

A crane, a history

The end, but the beginning of the forge exploration