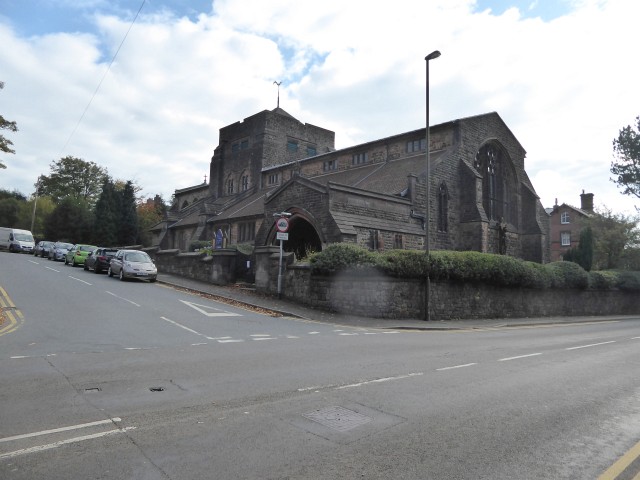 By chance I met MLHS member Pat Butler one summer’s day in Market Street. She went into raptures about the beautiful Arts and Crafts church of St Wilfrid, Halton, Leeds which she discovered when she came on the Society visit in May, and she suggested we carry on the Arts and Crafts theme with an autumn visit to Leek. Leek had a market in medieval times, but it began to flourish in the late 18th Century as a centre for the production of silk textiles. In the late 19th century the notable designer, William Morris, worked with Sir Thomas Wardle, the leading silk manufacturer of the day, in developing natural silk dyeing techniques. Morris’s architect and designer friends were attracted to the town and it became a focus for Arts and Crafts Movement architecture. The Society last visited Leek in 2002, so it was about time for a return. We started at Richard Norman Shaw’s All Saints Church of 1885.

From the outside All Saints is 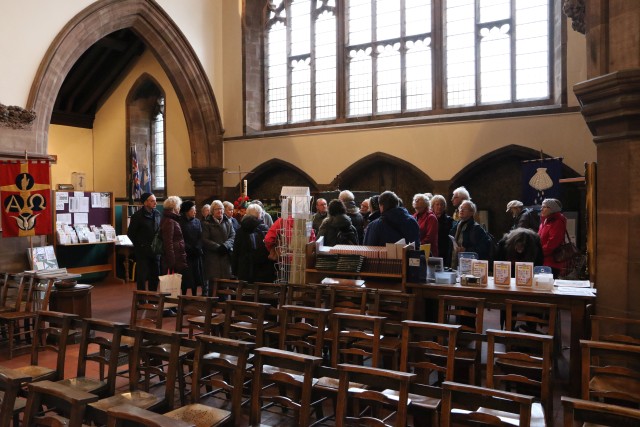 a rather austere but imposing building. It is Grade 1 listed, and the architect Richard Norman Shaw declared it to be his best church.

Inside the initial impression is of light and space, helped by cream painted walls and many windows. The influence of William Morris is visible in the Lady Chapel’s three light windows (Faith, Hope and Charity). Also, the nine light windows above the reredos is by Morris and Co. The walls and ceiling of the chancel and the sanctuary are covered in painted decorations by Gerald Horsley.

(above: The early morning briefing)

The wooden carvings of the Stations of the Cross are exceptionally good – the wood used had been rescued from a redundant Methodist chapel. The artist John Owen had included his personal mark of a swan on one of the carvings. With the proximity of November 11, red poppies wound round them and, very tasteful use was made of poppy displays elsewhere.

The banners and altar cloths are examples of the very high standard of embroidery done by members of the Leek Embroidery Society, and there was plenty to interest all of our party.

On leaving the church we walked across town towards the market place, admiring some notable buildings on the way. On a rather chilly day we had a walking tour, split by a break for lunch and a warm drink, of the traditional market town of Leek on the edge of the Peak District, ably led by Judith in the unavoidable absence of the official guide for medical reasons.

Many of Leek’s buildings were designed by the family architects, the Sugdens. In 1849 William Sugden came to Leek and in the following year his son, William Larner, was born.

William Morris, founder of the Arts and Crafts Movement, lived and worked in Leek between 1875 and 1877. He studied textile dyeing with Thomas Wardle, owner of a dye works in the town, and it was businesses in Leek which provided his firm with silk. It was 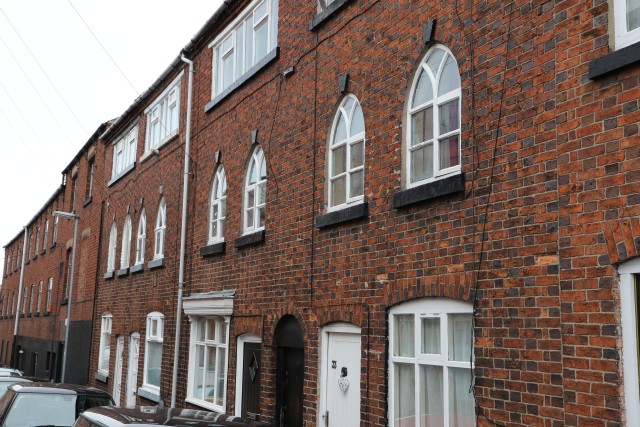 through the Society for the Protection of Ancient Buildings (SPAB) which Morris founded in 1877 that he came into contact with Larner Sugden. Larner was a great supporter of SPAB, and we were able to see a number of well-preserved Stuart, Georgian and Victorian buildings.

We started our walk along London Street, observing a number of workers’ cottages (left) in distinct contrast to the more affluent Arts and Crafts houses of the wealthier citizens. Continuing down the hill we came to the Ash Alms Houses for ‘maids and widows of the parish’ – no gentlemen callers allowed, and mustn’t scold the neighbours. On into St Edward Street to see Spout Hall (R. Norman Shaw 1873) and The Stone House, built in 1724 for a Quaker buttonman called Joshua Strangman, and occupied later by the Wardles. Lady Wardle founded the Leek Embroidery Society and their headquarters was No 54. Among other notable buildings is the NatWest Bank in Derby Street, designed by the Sugdens in 1882 for the Manchester and Liverpool Banking Company, in iconic Arts and Crafts style and exhibiting Ipswich windows and pargetting; and the Nicholson Institute, another Sugden design of 1884, built in the Queen Anne style with interesting relief panels above many of the windows. At the entrance to the Institute is Greystones, a 17th Century house, later owned by Joshua Nicholson, the local industrialist who had the Institute built, and occupied by his son Arthur. In a famous early example of conservation, Greystones was saved from demolition by SPAB. Leek’s coat of arms is made up of a 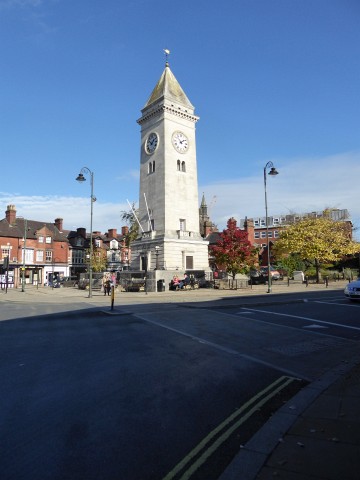 Saltire Shield; on the top is the Staffordshire knot which we had seen on the modern street furniture along Derby Street. The Nicholson War Memorial at the end of Derby Street was given to the town by Arthur Nicholson and dedicated in 1925.

And so we arrived at the Parish Church of St Edward the Confessor. It had to be rebuilt after a fire in 1297, and there are two Saxon crosses in the churchyard. It was a really cold day in Leek on 27th October, and we were doubly appreciative of the warm welcome as we stepped into the church. Lots of people stood over the warm air vents in the floor and then enjoyed a cup of tea or coffee before having a look round the attributes of the church.

Like Macclesfield, Leek was renowned for its silk manufacture; a fact that is manifest in the silk embroideries displayed in its Parish Church of St Edward. Although it is a medieval church, it was Lady Wardle, a uniquely skilled needlewoman, who supported by her husband, set up an Embroidery School for young ladies in 1879/80. Thus they worked by natural and candle light only; but the work produced was of a standard which I suspect can now only be aspired to.

The panel of six angels, having double wings (elaborately feathered); jewelled crowns and garments were striking. The detail is so fine that they have blusher on their cheeks, and gold thread (notoriously difficult to work with) highlighting the detail. The panel of four seated kings was also very impressive, with simple stitching somehow giving texture and an element of 3-D. The lyre was particularly exquisite, the gold thread glittering; it looked like a hologram.

Other cases displayed designs with floral and ecclesiastical symbolism. These include pomegranates, passionflowers, rising phoenix, olive branches, honeysuckle and its clinging stems… The colours…..mostly the four liturgical colours of red, green, white and purple are all still true.

My impressions are twofold. Th 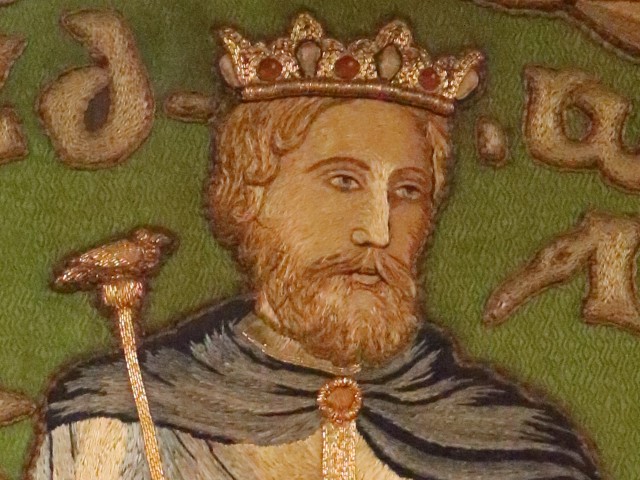 e embroideries are stunningly exquisite, especially the angels and kings. I am also awed by the skills, dedication and perseverance of the ladies who produced such work; which would have been free design on the base cloth, albeit not necessarily their design. I knew nothing of embroidery before visiting St Edward’s Church, but like many others I can appreciate why they are treasured as exquisite works of art.

All Saints also has a very extensive and notable collection of ecclesiastical embroidery. Much of it is over 100 years old, rather fragile and likely to be damaged if exposed to too much sunlight , so it is only put on display for one week a year, around May Bank Holiday. This is what many people associate with Leek, but we didn’t see much of it on this occasion. I’ve put myself on an email list to be told the date of the exhibition next year. I’ll let everyone know so those interested can go to Leek then.

In the late afternoon we boarded the bus for the drive back home, with lovely autumn sunshine to enhance the countryside.

Thanks are due to Brenda Reid, Gwen Pickford, Patricia Butler and Ann Haden for their impressions of the day. The tour organised was organised Judith Wilshaw, who also drew the report together, our thanks.

The memorial bears the names of 535 men and women of Leek and the surrounding area who died in the First and Second World Wars.

Church of St Edward the Confessor

A tea break with the angels