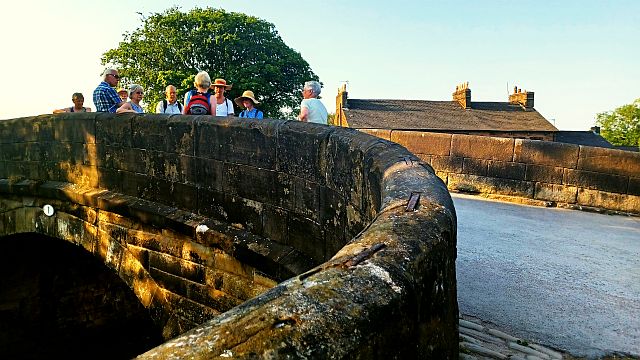 The throng gather by Top Lock

Twelve people gathered on what turned out to be a very warm evening, to take a stroll through Marple. Members and friends of the Local History Society were joined by members Jean and Mike Heap, who are also Canal and River Trust volunteers, and they kindly opened the CRT Welcome Station at Top Lock to let us see the photographic display and range of information available.

Our route took us from Top Lock on to Lock 9, up Station Road and through the Memorial Park to the centre of Marple, ending in the precinct.

We learnt that the Peak Forest Canal was built to transport limestone from Bugsworth Basin to Portland Basin in Ashton under Lyne and is just over 13 miles long. The flat parts were completed in 1796 and the locks by 1804. At the junction of the Macclesfield and Peak Forest Canals there was a narrowing of the canal where a lock had been installed to make sure that the owners of the two canals did not benefit from the other’s water! The lock was removed when both canals were eventually owned by a railway company. Here we could view the empty wharf building which will in due course be renovated for use by the community, near Top Lock(The Community Interest Company (CIC) which has driven this through gained ownership just a few days ago, so things are really starting to move now!) The Peak Forest Canal has 16 locks with a total fall of 209 feet to the Aqueduct. 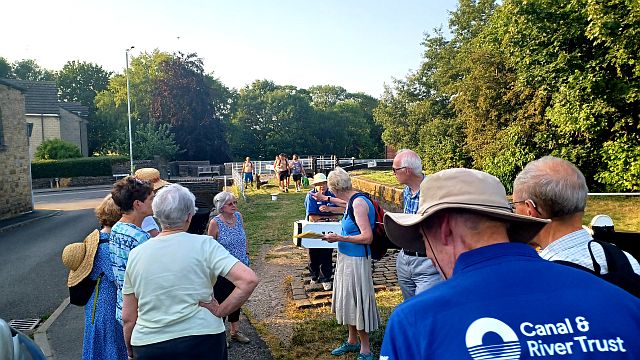 We walked from Lock 16 down to Lock 9, passing through the Horse Tunnel from above horse tunnel under the road at Posset Bridge. Here we saw the gouges in the stonework where the ropes used by horses pulling narrow boats had rubbed. [Horse tunnel mouth from below] At Lock 10 the evidence of the route of the tramway was clear in the stonework opposite Oldknow’s Warehouse. This tramway was used to convey burnt lime from Marple lime kilns at the top of the locks to the aqueduct for just a few years while they completed the lock flight. At Lock 9 we were shown the horse roller – a black and white painted piece of wood like a massive rolling pin. Grooves in the wood show how it helped guide the ropes as the horses moved on to the next lock on the far side of Station Road.  Lock Keeper’s cottage at Lock 9 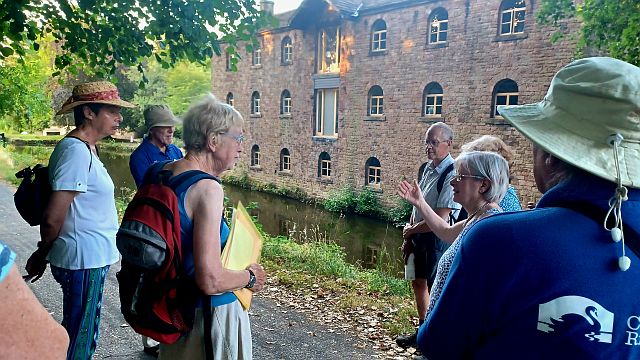 Standing at Lock 9 we could look across towards St Martins Road where the impressive former vicarage of St Martins Church stands on the corner – fit to welcome the bishop when he called! We passed large Edwardian houses lining Station Road and Garth Road, which took us into the Memorial Park, originally the grounds of the mill owner’s house, Hollins House, built around 1825 and Grade II listed. [Hollins House] (The grounds were made into a public park as a memorial to the fallen of the First World War in 1922. [War Memorial] It was fortuitous to visit on July 18 as the centenary of the opening of the park is to be celebrated this coming weekend. The park has been, and continues to be, a great benefit to Marple with recreational amenities and as a convenient location for useful necessities like the library, child health clinic, and senior citizens centre Further on we came to the location of Hollins Mill, where Asda supermarket now stands. The mill had been built in 1830, cotton spinning at first, but with weaving added quite soon. A short arm of the Peak Forest Canal Hollins Mill canal arm viewed from canal near Posset Bridge went into the mill yard, and the parapet of the bridge taking the drive to Hollins House over this arm is still visible. The mill was taken over by the twin Carver brothers and their partner Samuel Hodgkinson in 1857, and an information board nearby tells of the role of the Carvers in Marple society at the time. 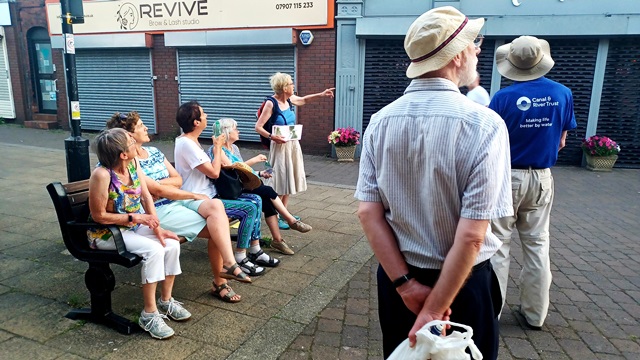 The evening draws to close, on Market Street

Then over to Market Street, where many of the buildings are dated. [Original Marple Coop] We compared pictures of old Market Street, top of Market Street with the current view, and shared memories of Marple in past times.

And so ended a warm and interesting evening stroll.

This was the third, and final, Marple Local History Society Evening Walk for 2022. Twenty two people had booked all established devotees of these activities, plus one visitor from Dingwall, north of Inverness! We were on schedule for one of the hottest evenings ever in Marple, so I wasn’t surprised when some didn’t show up, but twelve arrived. As most of the towpath has a border of trees and shrubs, and there was a breeze, things cooled down quite nicely as the evening progressed, but then, we had to walk slowly to see everything, so were not too overwhelmed, and everyone said they had enjoyed themselves. The fees have been donated to Mellor Archaeological Trust to use for maintenance of the Mellor Mill Site.

Apart from the celebrations for the centenary of the opening of the Memorial Park, centred on the weekend of July 23 and 24, but with an exhibition in the library from the Local History Society lasting to 29th July, there will be other events as the summer progresses, advertised on local websites. On Sunday September 11th, 11am to 4pm, there will be an open day at Mellor Mill with guided tours of the site. No charge. Refreshments and activities at Roman Lakes. Further information nearer the time by poster and on local websites. Watch this space!