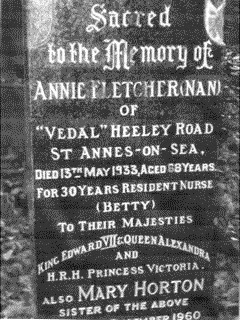 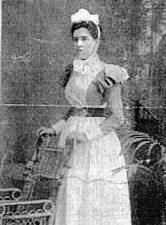 The census returns give us an insight into the family’s background. In the 1851, William, aged 11, the son of a miner, is described as a coal miner’s waggoner. A waggoner was usually a boy or a young man who pushed tubs of coal from the coalface and perhaps he did this job for his father.   He must have been very able and ambitious because by 1881, William, Sarah and their six children were living in Hawarden in Flintshire and William was a colliery manager.

By 1891 Annie had left home and become a nurse, probably an opportunity made possible by her father’s successful career. She trained at the Women’s Hospital in Liverpool and spent several years there. It was during this period that Annie met Frederick Treves, a royal surgeon. Treves was the doctor associated with the “Elephant Man” Joseph Merrick, sometimes called John Merrick.  Merrick was an Englishman with very severe deformities. Although his condition was incurable, through his association with Treves, he was allowed to stay at the London hospital for the remainder of his life. 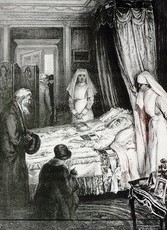 niece, Joan told me that Annie met Treves when she assisted at an operation he performed in Liverpool and it was he who had encouraged Annie to move to London. This she did and in 1901 she was living at Welbeck Street, SW1 where there were several hospitals, including the Kellerman Institute and the Welbeck Street Hospital “for diseases of the nervous system”. Welbeck Street is north of Oxford Street, near to Harley Street and that part of London continues to be associated with the medical profession.

According to her obituary, Annie first worked for the royal family in 1902, when Frederick Treves asked her to help nurse King Edward, after an operation to remove his appendix. The operation on the 24th June was performed on a table in the Music Room in Buckingham Palace and the next day it was reported that the King was sitting up in bed, smoking a cigar!   The operation caused the postponement of the Coronation, which eventually took place on the 9th 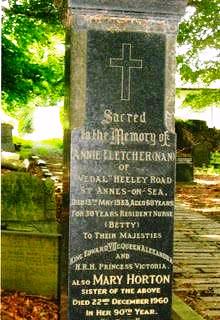 Annie must have made a good impression because she became nurse to both Queen Alexandra and Princess Victoria. She accompanied the royals on their journeys across Europe, and travelled on the Royal Yacht “Victoria and Albert”. In 1910 Annie was awarded the Order of the Red Cross. She was also given gifts of jewellery, including several pendants and brooches.  These gifts were sold at Bonham’s in 2003.

Annie eventually retired to St Annes on Sea, Lancashire where she lived in a house called “Vedal” – V for Victoria, ED for Edward and AL for Alexandra.

Annie used to visit her sister Mary Horton at her home Peacefield, Cross Lane, Marple and it was here that she died on the 13th May 1933 after a short illness. Mary’s granddaughter Joan remembers being told that Annie loved the countryside around Marple and had wanted to be buried here. Annie’s grave with its black marble headstone can be found in the lower part of the graveyard, next to the pathway that leads to the stile in the boundary wall.

As a footnote to this story, two of Annie’s great nieces, Joan and her sister Dorothy became nurses.