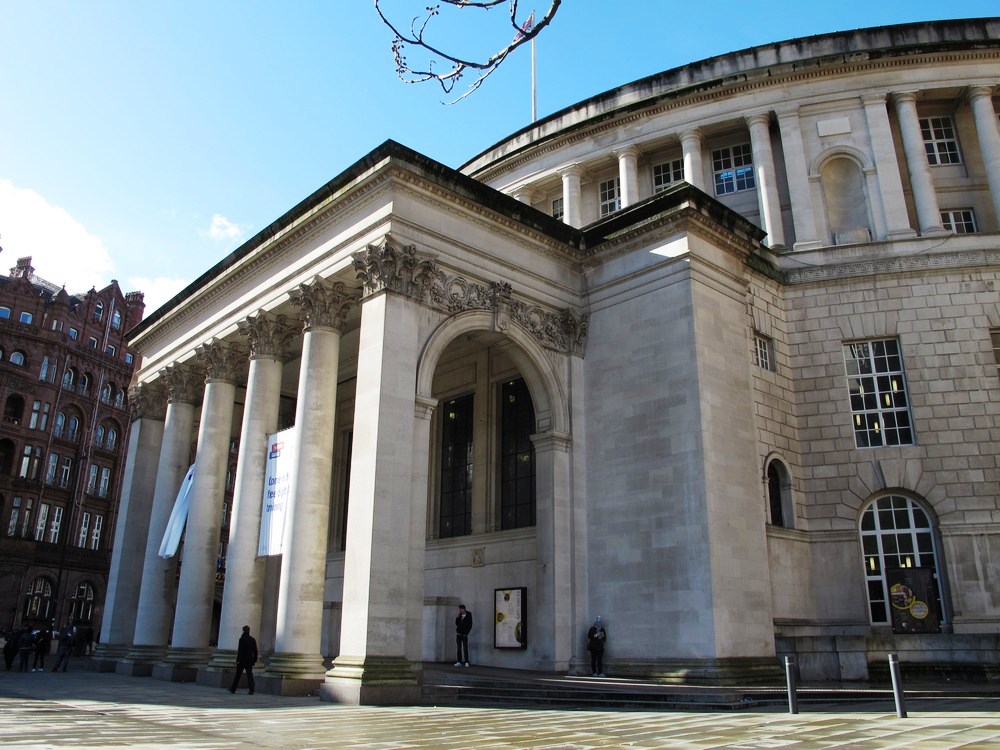 No coaches allowed on this trip. Make your own way, pal! Not a great surprise though, as the destination was Manchester. Your scribe began his day’s odyssey in the waiting room of Rose Hill Station, learning from a fellow traveller the benefits of a Wayfarer ticket with a senior railcard. With this you could have a reasonably-priced junket to see the Flying Scotsman in York. Diversion over! - Back on track to Manchester.

The last time Judith brought us to St Peter’s Square we were visiting the site of the Peterloo Massacre. Fortunately there were no rioters in sight though the area looked to be in the aftermath of a riot. Paving slabs torn up, piles of steel rails, temporary barriers everywhere. GMPTB were merely changing the tram route, so we were allowed to reach our destination – the Library. It still looks very much like it did when George 5th opened it in 1934. The architect was a great believer in “the grandeur that was Rome” so Central Library is often compared with Emperor Hadrian’s Pantheon. Not by the proletariat of Manchester, however. To them it was “the Corporation wedding cake” or “the St Peter’s Square Gasometer.”

Pity the architect forgot to provide any workrooms for the staff. Not only that but when, after the opening, the King and Queen were whisked off to the 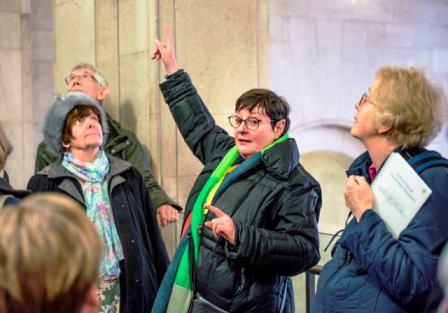 private apartments on the second floor there were no toilets in the vicinity and they had to make do with a couple of chemical Elsans brought in specially for the occasion. This followed the almost regal embarrassment of the King as his key was not able to open the front door. Luckily red faces were saved by a young lad nipping through a side door and unlocking from the inside. A story passed to us by excellent guide Ann Beswick. (left)

No such slip ups for our visit. After being closed for four years for a complete makeover there were enough toilets for everyone. From the outside the library looks much the same but the interior is a revelation. Gone are 35 miles of stack corridors. 70% of the books were invisible then, hidden amongst them. Now 70% are visible, touchy feely. There were touch screens and computers and interactive displays and soft chairs everywhere you looked.

We couldn’t see any books at first but then we found out that the Lending Library was downstairs, out-of-sight. Not that they were ashamed of it. It just didn’t have the cachet of the spanking new Media Centre that provides access to “creative software as well as the latest gaming consoles.” The transformation came with a £48 million price tag, but the Reading Room was a 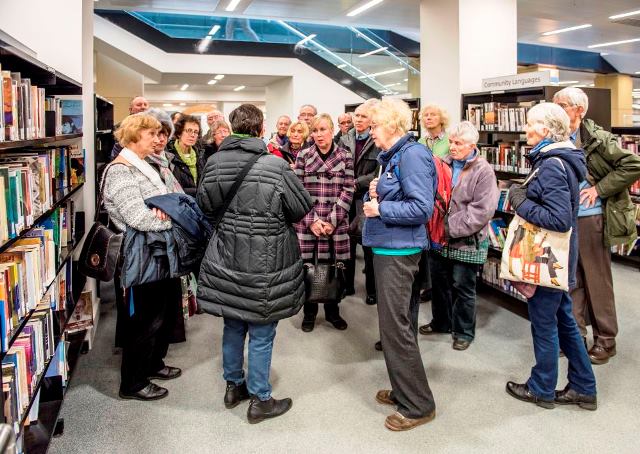 half million pound extra, paid for by the Wolfson Trust, – a hallowed area with echo to suit. This really is the jewel in the crown (though the café selling Lancashire crisps came a close second.) Seating for 300 people at long tables under the dome. Quiet and peaceful but if your eye should wander there was still the worthy advice from Proverbs 4: “Wisdom is the principal thing ……”.etc for fifty words. If the dome had been any smaller they couldn’t have fitted it all in.

The Corinthian columns, at the entrance were reported to be a popular romantic rendezvous in the early years and famous users of the library include novelist Anthony Burgess and pop icon Morrissey. The day before our visit, on Wednesday 2nd March, Tony Warren, creator of Coronation Street, died. Playing truant from Eccles Grammar School, for almost a year, he spent his days reading plays and biographies at the library, in the Reading Room. With Karl Marx & Friedrich Engels studying together at a table in an alcove of Chetham’s Library, in 1845, we may ask, “What is it about Manchester libraries?”

When we reached the Family History section and it’s volunteers, they introduced us to Dean Kirby, northern correspondent of the Independent and author of the new volume ‘Angel Meadow, Victorian Britain’s most savage slum’. In January Mike Nevell had given the Society a talk on Housing in 19c Manchester – we had come full circle.

All in all the money was well spent. Our guide mentioned that the library was paid for partly by profits from the Manchester Corporation Gas Board, I shall leave the reader to ponder on the destination of today’s gas profits. Did you know that you could get married in Manchester Central Library? That really must be every girl’s dream. Still. Enough of this fantasisi 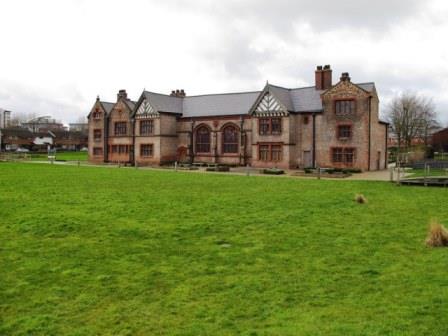 ng. We had work to do. But first, take lunch and take a tram. Then off to the second wedding venue of the day – Ordsall Hall. (right)

Quite a contrast. A stately home right in the middle of Salford. David de Hulton should have realised that they were going to build Salford Docks in the vicinity 700 years later, and the Hall would lie in the middle of a housing estate. It would have ruined his property values. Still, now that the name has been changed to Salford Quays it is a bit more up market. Just like the library, Ordsall Hall has been refurbished but they only spent £6.5 million on it.

The twenty travellers were taken through the building, venturing through the various ages of construction. The place has quite a history and Salford is very proud of its Learning Team which tries to make the long history digestible for the various local schools that visit regularly. Although there has been a house on the site since 1177, the oldest part of the present building only dates back to the fifteenth century – a time when the Hall was in its heyday. Owned by the Radclyffe family, it was described as a 'manor house of exceptional beauty'. However the Dutch humanist, Erasmus, who stayed here in 1499 did not agree. “the floors are made of clay and are covered with layers of rushes, constantly replenished, so that the bottom layer remains for 20 years harbouring spittle, vomit, the urine of dogs and men, the dregs of beer, the remai 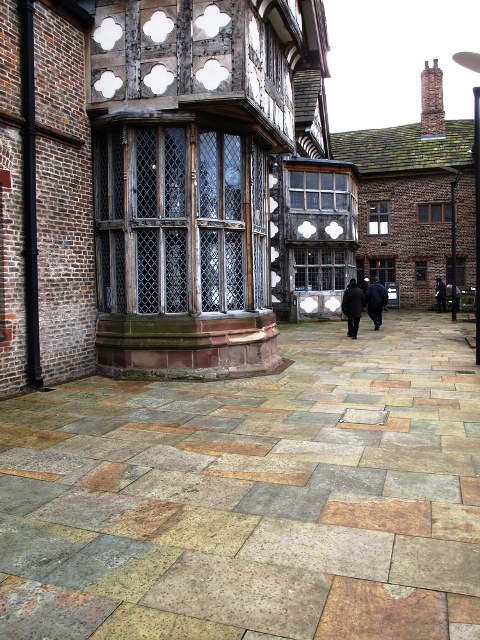 ns of fish and other nameless filth.”

Unfortunately the Radclyffes backed the wrong side in the Civil War and they had to sell the property. At the time it was the largest house in Salford with nineteen hearths. However, it then went through a succession of owners, eventually being rented by a local mill to use as a working men’s club. The Great Hall was converted into a gymnasium. What an indignity! Fortunately Earl Egerton of Tatton decided that was unacceptable so he bought the hall, renovated it and founded a training school for clergy. Over the years it had several uses including a radio station in the Second World War but eventually it was sold to Salford in 1959. On our venture, into one of bedrooms, we learnt that the 1570 marriage bed had come up for 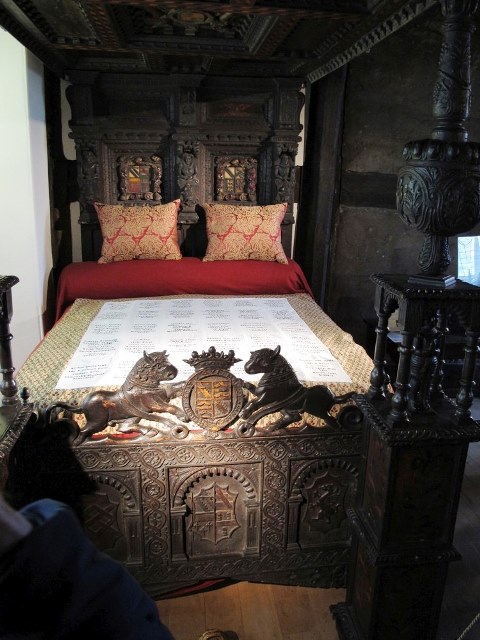 auction at Bonhams. Salford had lost on the bidding, but the philanthropic millionaire who successfully bid £65,000 for the bed, (right) has loaned it to the Hall, for a minimum of five years. Our final port of call on this voyage around the Tudor house was the attic, a cold area but a fine example of wattle and daub, only surpassed when the age of bricks began. On our retreat for a cuppa, spotted in the stairwell, this nugget, “The Hall has three online ghost cameras, which are visited by approximately 30,000 people each month”. We kept together on the stairs.

To their credit the city has made a decent fist of using and conserving the hall. After the last major restoration with the help of Lottery money, the house is now open, free of charge, for five days a week. Anyone can visit to see the kitchens, the Great Hall, the Star Chamber and the Radclyffe Bed. Salford City has a different philosophy to many heritage organisations and the emphasis is on immersive learning. Much of the furniture is in the form of modern reproductions and the advantage is that you are encouraged to use them, not just look at them.

Judith arranged an interesting and contrasting day which showed the way ideas and attitudes change, not just over centuries but even over decades.